The government has published its Plan for Living with COVID.

This page has all the latest information on the situation in the Banbury FM area, together with the latest graphs showing the infection rates where you live.

We have answered some questions on the information here at the bottom of the page.   If you have a question please email news@banburyfm.com.

Under it’s Plan for Living with COVID the government lifted all remaining restrictions from February 24.

There are still steps you can take to reduce the risk of catching and spreading COVID-19:

This graph shows the infection rates in the Banbury FM area over time.   It includes Banbury and its surrounding villages, Brackley, Kings Sutton, Greatworth, Evenley, Middleton Cheney and Chipping Warden. 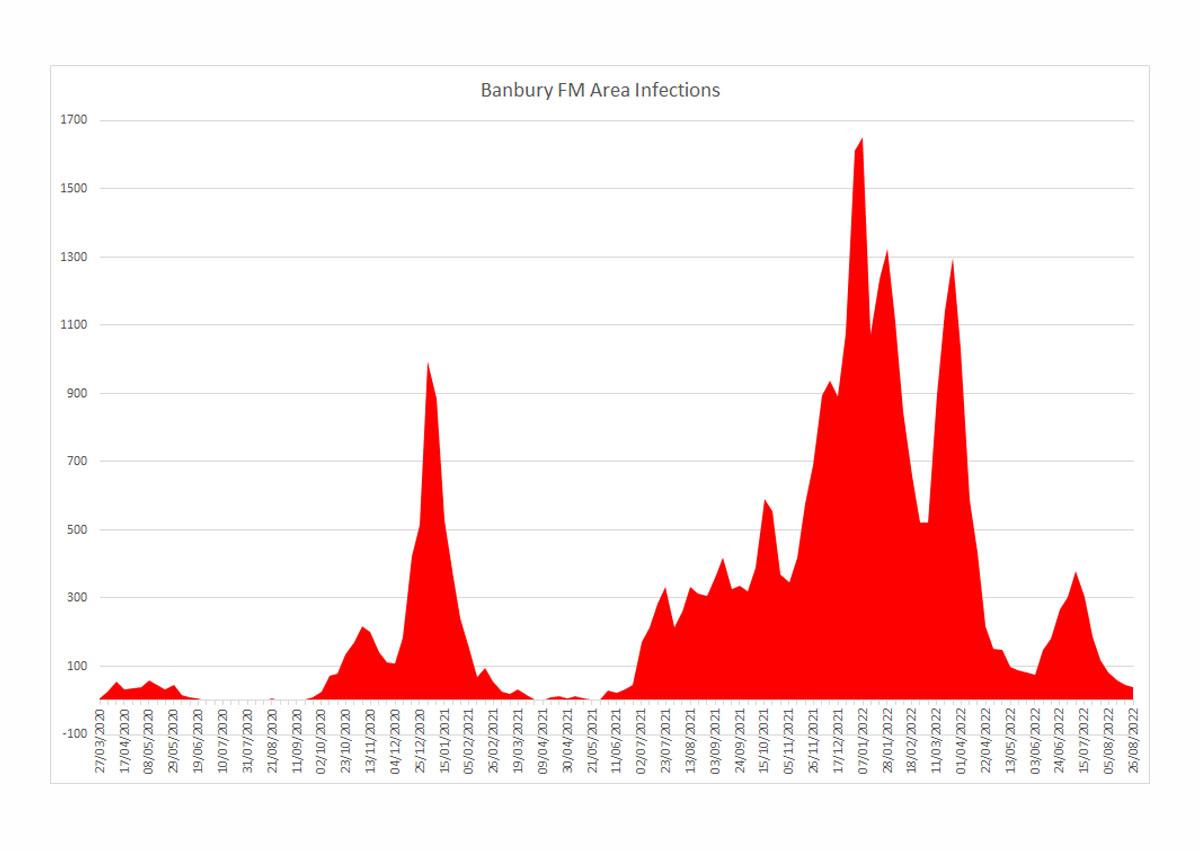 Infections in your area

The following graphs show the number of COVID-19 infections in each area of North Oxfordshire and neighbouring areas of South Northants over a number of weeks.

Each graph uses the official government data for the total number of infections per week – the number of people with a lab-confirmed positive test result.   Please note that areas with infections under 3 people are now officially suppressed to protect the identities of the individuals concerned.

The graphs contain the most recent data which includes all cases up to 26/08/22.

Graphs for areas outside Banbury town

Your graphs show no infections in an area but the school is closed because the teachers have infections.

The teachers will be recorded in the figures for where they live, not where they work.   The Infections In Your Area graphs are full week data up to the date shown.   Recent infections after this date will not yet be shown but will be added when the full week data is released by the government.

We can’t understand your 7-day figures as some days they are going up and the next they are lower.

The graphs don’t look like things are getting worse, so what’s the problem.

Please remember the graphs show NEW cases.   These are not cumulative graphs.   New cases are not good.   We should aim for no cases.

You are making things look worse by adding several villages together.

The official data is released in electoral wards and that is how we report it.   If you visit the Cherwell District Council website you will see that, for example, Adderbury, Bodicote and Bloxham is one ward.   Conversely Banbury is split into several wards.   This is due in part to the number of people living in an area.

Since when has Brackley been in North Oxfordshire.

It isn’t.   We were asked to add information for the areas in South Northamptonshire that are our nearest neighbours.   People in Middleton Cheeney will probably visit Banbury and interact with the community here.   In broadcast terms Ofcom notes “Banbury and Brackley” as one area.   When we quote Cherwell figures the data from South Northants isn’t included.

Where does this information come from.

We receive the data presented above from the official government daily feed.