Harry and Meghan arrive in Germany to promote Invictus Games 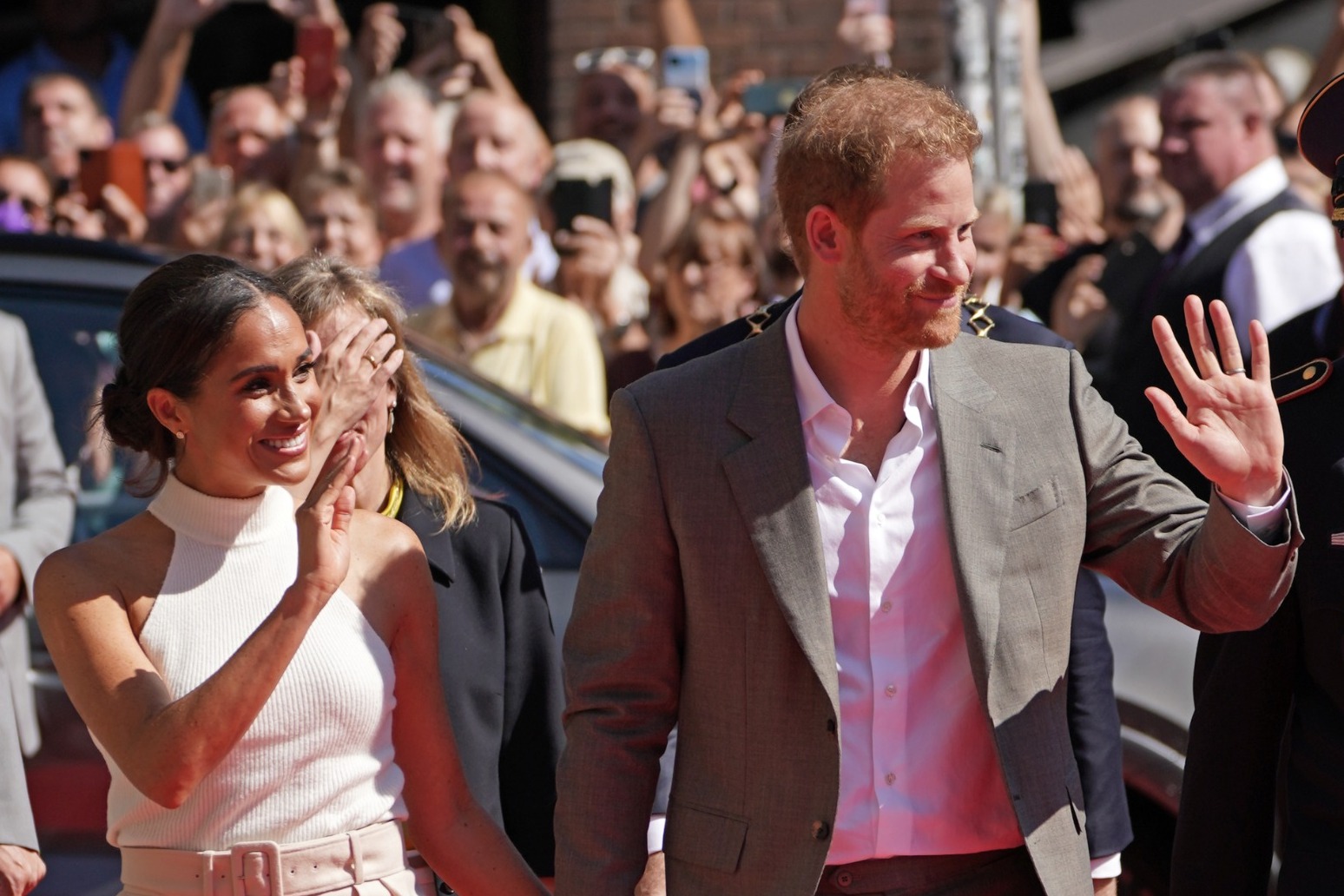 The red carpet was rolled out for the Duke and Duchess of Sussex as they were welcomed to Germany for an Invictus Games event.

Meghan wore a cream top and beige wide-legged belted trousers as she stepped into the bright sunshine in Dusseldorf.

Harry, dressed in a suit and white shirt, smiled at the onlookers who had gathered at the front of the city’s Town Hall.

The couple are attending a reception for an Invictus Games event, marking the one-year countdown to the Dusseldorf 2023 games.

The pair are expected to meet officials and potential competitors in the city on Tuesday.

They will be taken by boat along the Rhine River from the reception to the Merkur Spiel-Arena for a press conference at which Harry will deliver remarks.

The MS Rhein Galaxie was seen docked along the river on Tuesday morning.

The duke founded The Invictus Games to aid the rehabilitation of injured and sick military personnel and veterans across the globe, by giving them the challenge of competing in sporting events similar to the Paralympics.

The Dusseldorf games will take place in September 2023, with more than 500 competitors from 21 nations across 10 sports.

This year’s games took place in The Hague in April, and during that event a camera crew filming for a Netflix documentary called Heart Of Invictus, a series from Harry and Meghan’s Archewell Productions following people competing at the event, was seen close to the couple.

Harry and Meghan’s outing on Tuesday comes after they made their first public appearance in the UK since returning for the Queen’s Platinum Jubilee.

Meghan gave the keynote address in Manchester on Monday for the One Young World summit.

The former actress told the 2,000 delegates how her life had changed when she last joined the summit in London in 2019, singling out her role as a wife and a mother, but making no mention of becoming a senior royal the year before.

“And by that point, it’s fair to say, my life had changed rather significantly.

“I was now married, and I was now a mom,” she said, leaving a pause at the end which was filled with huge cheers from the audience.

“My world view had expanded exponentially, seeing the global community through the eyes of my child,” she added, speaking about her son Archie.

The couple’s trip in the UK and Germany comes just days after Meghan’s wide-ranging interview with The Cut magazine, in which she said it takes “a lot of effort” to forgive and hinted that she can “say anything”.

The former Suits star said in that interview that “just by existing” she and Harry were “upsetting the dynamic of the hierarchy” before they stepped down as senior working royals in 2020.

During the proceedings on Monday, the couple sat in the front row on stage, side by side on a bench, as they joined One Young World counsellors to watch the flag bearers enthusiastically parading the flags of more than 200 countries.

The couple travelled by train from London to Manchester, and flew commercial from the US to the UK.

Brigadier General Alfred Marstaller, chief executive of the Invictus Games Dusseldorf, said those involved were “honoured” to welcome the couple for the event in Germany.

They are due to return to the UK for the WellChild Awards in London, where Harry will deliver a speech on Thursday.