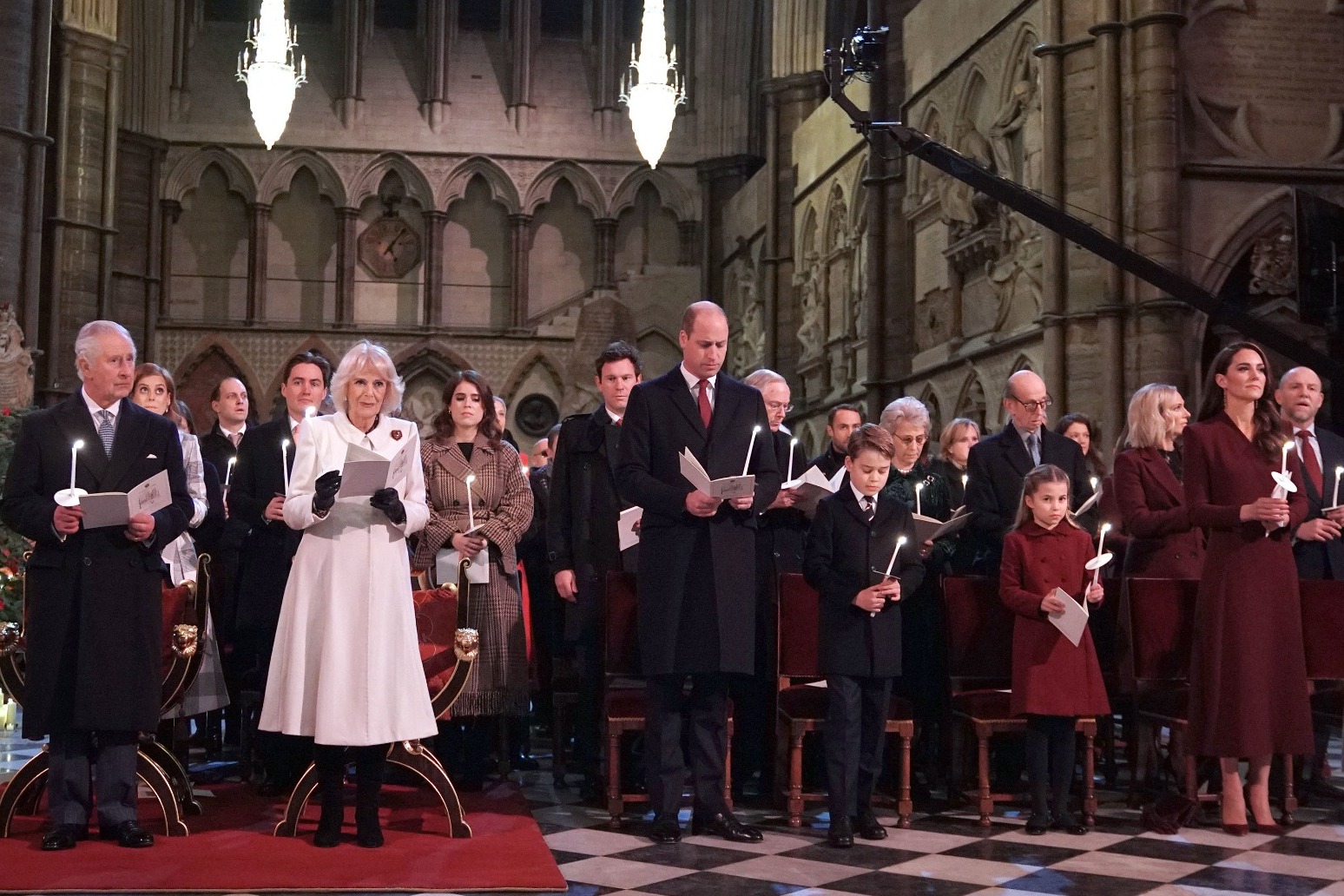 Prince George and Princess Charlotte joined their parents for a Christmas carol concert where the Princess of Wales joked about her singing talents with the star guests.

The royal family put on a united front at Westminster Abbey just hours after the final part of the Sussexes’ documentary dropped on Netflix.

The King, the Queen Consort and Prince of Wales joined Kate and the wider royal family for her festive concert on Thursday evening.

The princess, who was smiling and looked relaxed, arrived before 4.20pm dressed in an elegant deep red coat dress with matching shoes and clutch bag.

She greeted clergy at the door of the abbey before going inside where she chatted with guests and enthusiastically high-fived children.

Kate, who was hosting the event, thanked those taking part, including actor Hugh Bonneville who read a letter from Paddington to his Aunt Lucy.

Laughing and joking with the guests, Kate was heard telling singer Alfie Boe about her own musical skills, saying she needed more practice singing.

“On the piano you can slightly hide away a bit more than you can do singing,” she said.

“Actually my children probably wouldn’t forgive me – I’m not sure whether they think I’ve got a particularly good singing voice. I’ll have to have some lessons.”

Kate said she knows how busy this time of year is for everyone as she told them she was “hugely grateful” for their participation.

She also caught up with family members including Princesses Eugenie and Beatrice before heading back outside to welcome her husband and two children, who arrived before 5pm.

When Kate greeted her family outside there were cheers from members of the public and shouts of “Kate, we love you” and “Prince William, we love you”.

During the service William read an extract from the late Queen’s 2012 Christmas message.

More than 1,800 people gathered in the abbey for the concert, staged to recognise the “selfless efforts of individuals, families and communities across the UK, and celebrate and showcase the joy that human connection and togetherness can bring”.

Kensington Palace said the second carol service was dedicated to the late Queen and the values she demonstrated throughout her life, including “duty, empathy, faith, service, kindness, compassion and support for others”.

The palace said these principles are “shared and personified by the inspirational guests who have been invited to the abbey in recognition of their tireless work to help and care for those around them”.

A Christmas tree in the abbey was decorated with small Paddington Bear decorations, a nod to the late Queen’s famous sketch, while guests were greeted with atmospheric snowflakes from a snow machine as they arrived at the entrance.

Members of the royal family who were at the concert included the Countess of Wessex, the Duke and Duchess of Gloucester, the Duke of Kent and Princess Alexandra.

Princess Beatrice and her husband Edoardo Mapelli Mozzi, Princess Eugenie and Jack Brooksbank, Prince and Princess Michael of Kent, Lady Gabriella Kingston, Zara and Mike Tindall, and Daniel and Lady Sarah Chatto were among the guests.

Kate also had the support of her parents Carole and Michael Middleton, her sister Pippa and her husband James Matthews, and her brother James and his wife Alizee.