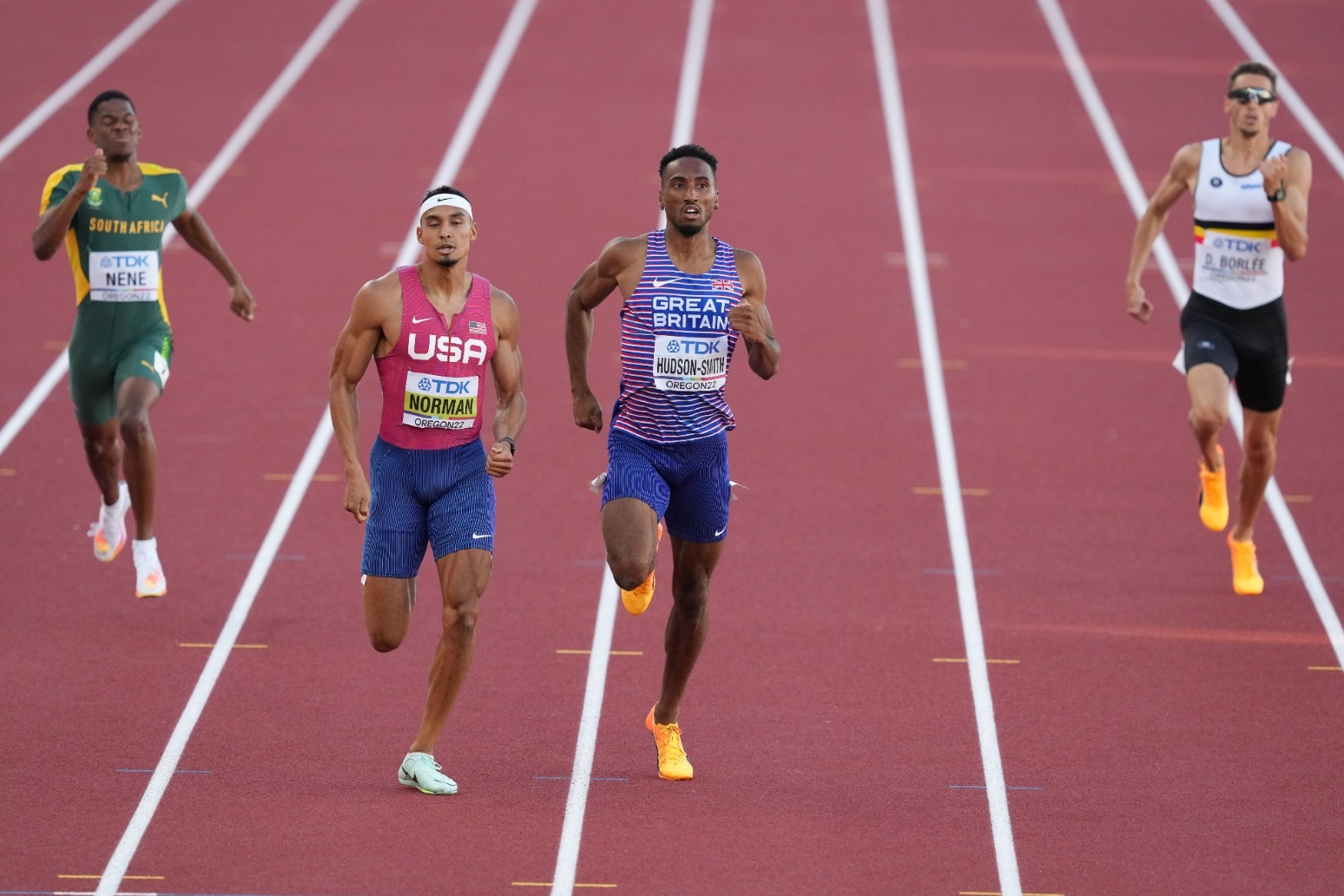 Matt Hudson-Smith cruised into the 400m final at the World Championships and declared he is ready to win.

The European champion ran 44.38 seconds in the first semi-final at Hayward Field on Wednesday evening.

Hudson-Smith finished behind the USA’s Michael Norman in his race and qualified second-fastest for Friday’s final in Eugene.

“I can win this. I’ll get ready for the final. I had something left but I messed up big time on the last 50m, big time,” said the 27-year-old, who set the British record of 44.35 seconds on the same track in May.

“I just went long, I started striding long and it broke my speed, just like doing the chicken dance – that’s what we call it.

“It was a good 350m, I went long, I looked to my right and felt Norman, so I went long and he capitalised on that. He got the victory because of that.

“If I correct those two things, I’m on my way through.”

Alex Haydock-Wilson’s personal best of 45.08 seconds was not good enough to qualify.

In the evening’s only final in Oregon, Aimee Pratt came seventh in the 3,000m steeplechase – which was won by Norah Jeruto of Kazakhstan – in a British record of nine minutes 15.64 seconds.

Max Burgin, the fastest man in the world over 800m, had to pull out of the event after suffering a calf injury.

Dan Rowden and Kyle Langford, who finished fourth at London 2017, made it through to the semi-final.

Langford said: “It’s been amazing. Laura (Muir) winning a medal gave the team a boost and then Jake (Wightman) winning just sparked us – we were all cheering watching in the lounge, crying, tearing up.

“For me it really lit a spark up and I wasn’t really too bothered for the whole week and even yesterday, right up until Jake’s race. Then I after it I felt ‘OK, I’m excited to go now’.”

Jessie Knight was knocked out in the 400m hurdles semi after running 55.39 and Victoria Ohuruogu, Ama Pipi and Nicole Yeargin all failed to reach the 400m final.

“I knew if I was going to try and make that final, I was going to have to run a PB,” said Ohuruogu after running a personal best of 50.99 seconds. “It may have seemed like a crazy idea but I set my expectations high.”

Eilish McColgan ran a season’s best of 14 minutes 56.47 seconds to reach the 5,000m final with Jess Judd but there was no place for Amy-Eloise Markovc.

Double Olympic 800m champion Caster Semenya, unable to run in events between 400m and one mile without taking testosterone-reducing drugs, did not progress.

McColgan said: “I’ve had a bumpy ride to get to this champs. I feel my fitness is there but I’m not sharp at all. I’ve missed so many races – usually I would have done a couple of 1500m races in the States early in the year but I couldn’t do them due to Covid, and then I got laryngitis.

“I feel like I’m not turning the way I would like. I know I can run a strong pace so I knew I had to take that out in sub-15. I knew sit and kick wasn’t going to cut it.”