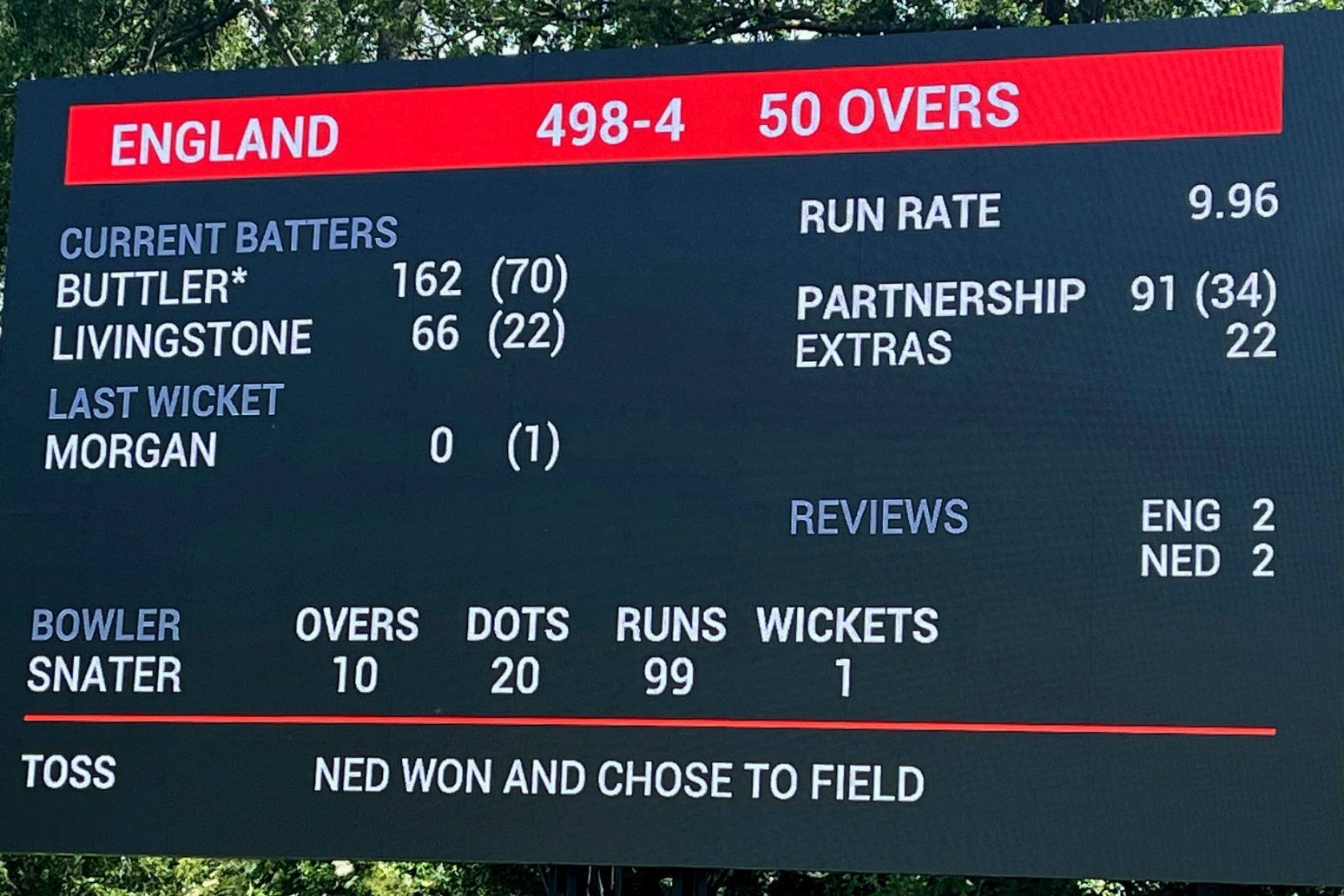 England set a new record for the highest 50-over total in history as Jos Buttler and Liam Livingstone shone in their 498 for four against the Netherlands on a sweltering day in Amstelveen.

Not only did this remarkable effort eclipse the previous one-day international best of 481 for six England amassed against Australia three years ago, but it also betters the 496 for four Surrey registered against Gloucestershire which had stood at the top of the List A summit since April 2007.

Buttler missed out on breaking his own record for the fastest century by an England batter by just one delivery, reaching three figures from 47 balls, before finishing unbeaten on 162 off 70 as their semi-professional opponents were punished to the fullest extent by a series of costly fielding errors.

Livingstone walked out with the total on 407 for four and blazed the quickest half-century by an Englishman off 16 balls – finishing on 66 not out from 22 deliveries, the coup de grace following a staggering few hours.

Phil Salt’s maiden international ton and Dawid Malan’s first in ODIs in a 222-run union helped England recover from the early loss of Jason Roy, bowled by his cousin Shane Snater, before Buttler kicked the visitors into overdrive.

Dropped on 37, Buttler, the most valuable player and top-scorer at this year’s Indian Premier League, clattered seven fours and 14 sixes in what is Matthew Mott’s first game as England white-ball head coach.

In total there were 26 sixes – another ODI record – in an exhibition of boundary hitting that may raise questions about the viability of this three-match series although the Netherlands, who elected to field first, also spilled opportunities from Salt and Livingstone before they had reached 50.

England’s last ODI outing came last July when a shadow squad containing Salt and Malan beat Pakistan, and the pair were brought together in the second over here after a false start. Snater claimed family bragging rights when he snaked one through the defences of his mother’s sister’s son Roy.

But England’s full-throttle modus operandi, whatever the situation, was on show as Salt drove crisply and pulled authoritatively for one huge six to get the scoreboard ticking. Salt was given a life on 40 when Snater put down a simple chance in the deep while Malan overturned a close lbw verdict on 25.

A flat pitch frustrated the bowlers as Salt cashed in on his lifeline, crashing Logan van Beek into the hospitality tent, and his intent allowed Malan to tick along as they went to fifties and beyond.

Salt brought up his maiden international century off 82 balls before top-edging to short third for 122 but that merely brought Buttler out, shuffled up the order to lend his star power to proceedings.

On a blisteringly hot day, Buttler raised the temperature even further once he had settled, impudently taking down the slow left-arm spin of Dutch captain Pieter Seelaar for three sixes in four balls.

He was put down by Nadeem Musa running in from long-off after failing to land cleanly before Malan went to three figures – becoming just the second England men’s player to make centuries in all international formats after Buttler.

Malan largely deferred to Buttler in their 184-run stand, with the left-hander contributing just 39 to the partnership, but the decision to get off strike allowed his partner to keep peppering the boundary, with Bas de Leede ramped twice before being carted over deep square.

England had three centurions in an ODI innings for the first time when Buttler hammered Aryan Dutt for the first of three successive sixes before the in-form batter overtook Malan, who holed out for 125 before Eoin Morgan was lbw from the next ball.

But any expectation that would slow down England’s scoring was extinguished as Livingstone smashed 32 in and over from Philippe Boissevain, who put down a steepling chance when the all-rounder was on 46.

It was appropriately Buttler who took England to their world record total with his last six over cow corner and while England missed out on 500, Livingstone ended the innings with the last maximum.