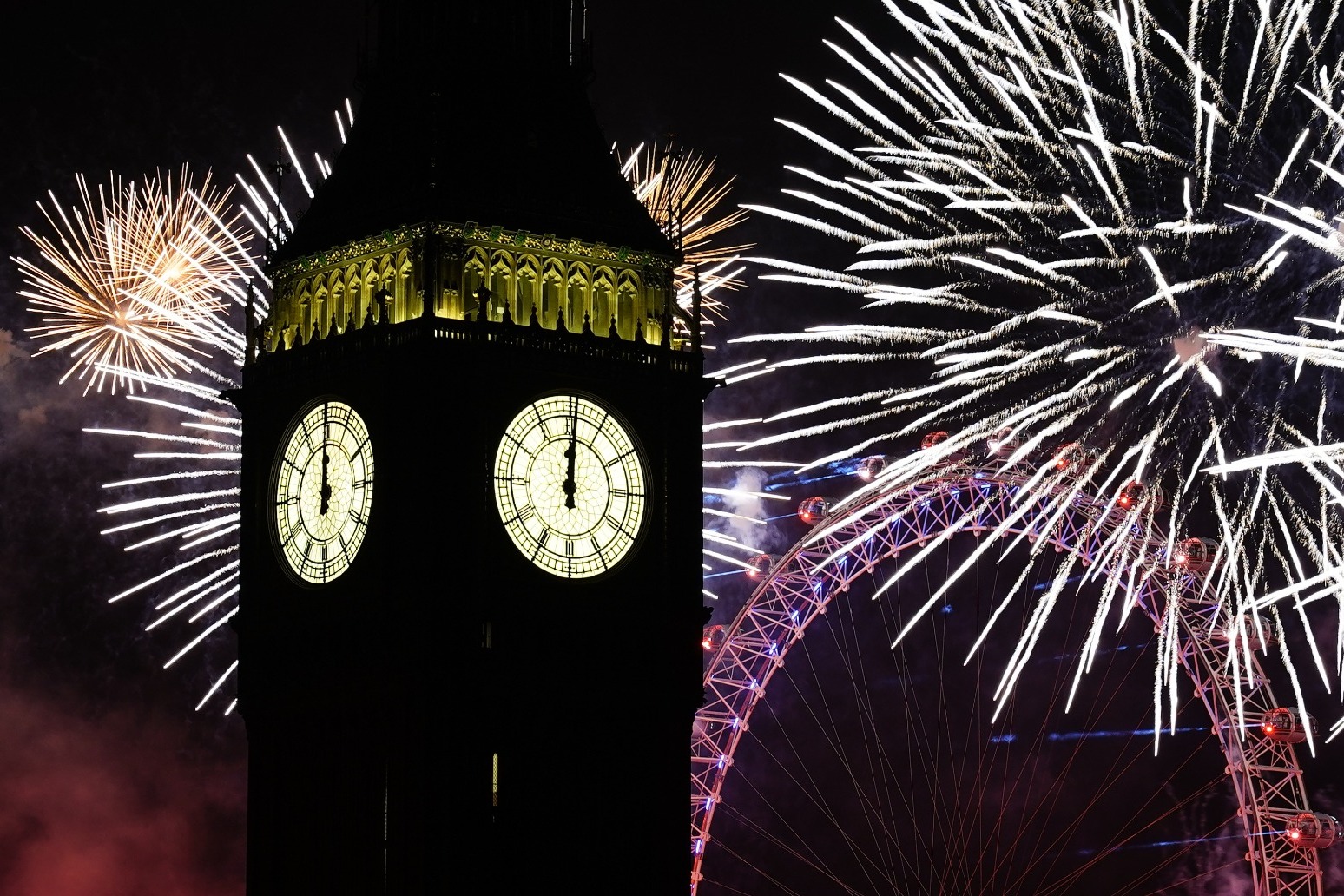 More than 100,000 people lined the banks of the River Thames to watch a spectacular fireworks display in London

The UK has ushered in 2023 with revellers across the country celebrating New Year’s Eve.

Partygoers defied wet weather to welcome in 2023 after the Met Office issued yellow warnings for rain in England’s South West and southern Wales, and warnings for ice and snow across the Scottish Highlands.

Big Ben bonged in England’s capital as a crowd of more than 100,000 people gathered along the Thames Embankment in central London to watch 12,000 fireworks streak across the sky.

The sold-out show was designed to send a message of “love and unity”, as it highlighted the Lionesses’ history-making Euro win at Wembley, marked 50 years of London’s Pride with a message from Peter Tatchell from the Gay Liberation Front, and sent a message of support to Ukraine.

The display also paid tribute to the late Queen, featuring a voice recording from her and words from Dame Judi Dench, before honouring the King, together with a message from Charles about the need to preserve our planet’s future.

Drones spelled out a positive message during the show, welcoming in “2023 with love from London” as fireworks exploded behind them.

Mayor of London Sadiq Khan said he was “delighted” that Londoners and visitors could once again join together on the banks of the River Thames to ring in the new year.

Thousands of Metropolitan Police officers were on duty across the capital, with the force later saying eight people were arrested for offences including assault on police, drunk and disorderly, and possession of an offensive weapon.

Officers have worked with charity Safer Spaces to build a place in Duncannon Street, central London, for women and girls to go should they feel unsafe.

While other parts of England also celebrated with fireworks, the North Yorkshire seaside town of Scarborough did not.

An Arctic walrus, believed to be “Thor” – who was spotted on the Hampshire coastline earlier this month, arrived in the harbour earlier in the day.

Scarborough Borough Council cancelled the fireworks display on the advice of British Divers Marine Life Rescue after the organisation expressed concerns that it could cause “distress” to the mammal.

In a village further down the coast in East Yorkshire, re-enactors took part in the Flamborough Fire Festival in a Viking-themed parade.

“Thinking back to Hogmanay last year and indeed the year before that, we’re reminded of just how far we have come from the very darkest days of the pandemic,” she said in a New Year’s Eve message on Twitter.

People queued in the rain to enter the party in Princes Street.

Fireworks lit up the sky behind the city’s castle.

More artists rang in the new year with song as Eurovision star Sam Ryder performed hits on BBC One.

In Cardiff, families partied in the city’s Winter Wonderland, while people in Belfast celebrated at Europa Hotel’s annual Gala Ball.

Some of the world has already greeted the new year.

Pacific nation Kiribati was the first country to wave in 2023.

Auckland followed an hour later where huge crowds gathered below the Sky Tower for a countdown that ended in fireworks.

More than one million people flocked to Sydney’s waterfront in Australia as over 7000 fireworks were launched from the top of the Sydney Harbour Bridge and another 2,000 from the Opera House.

Celebrations were also held at the Great Wall in Beijing, while Shanghai Disneyland put on a special fireworks show.

In Ukraine, some soldiers decided to stay in the trenches to defend their country while others returned to Kyiv to spend New Year’s Eve with their loved ones.