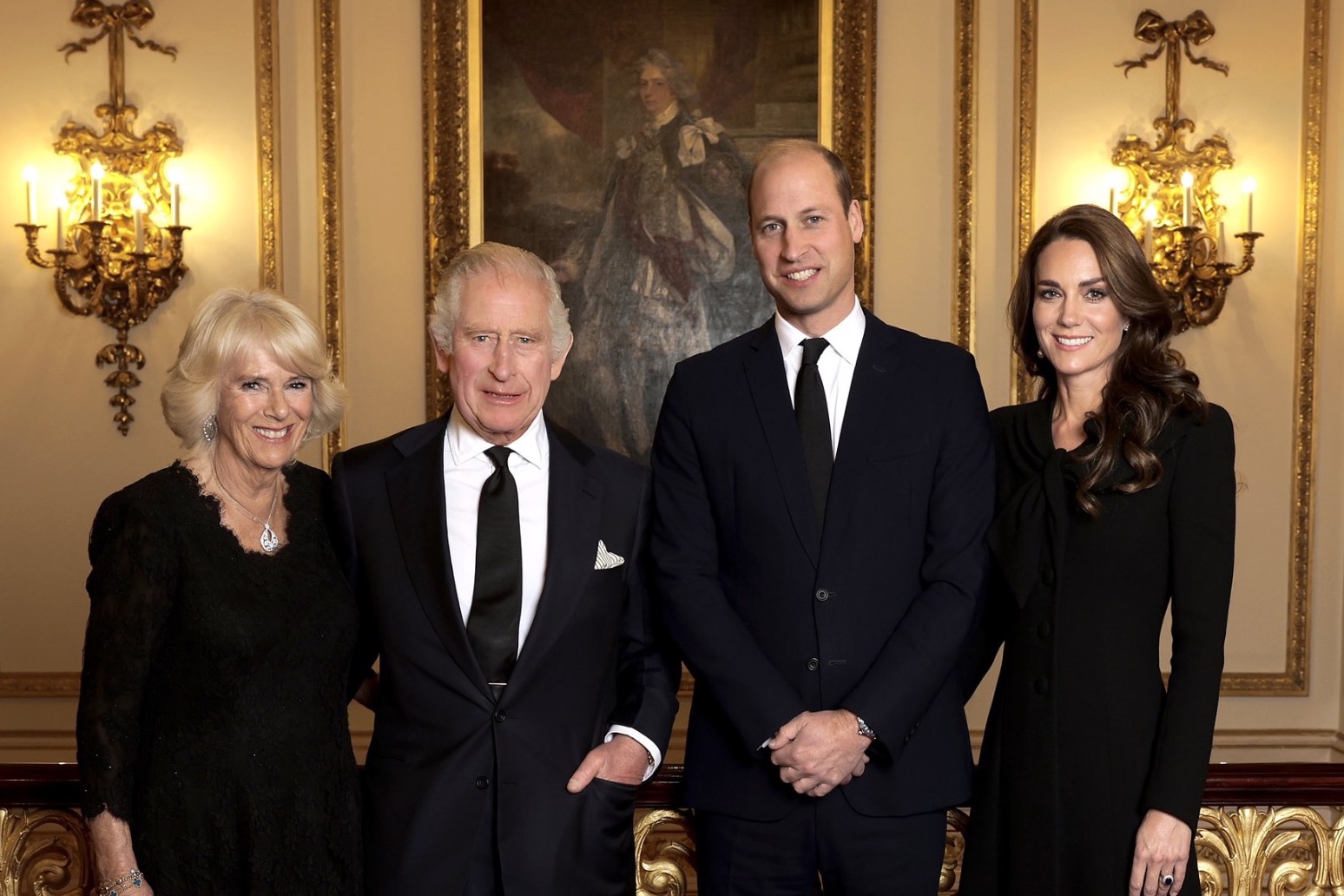 A new family portrait has been released by Buckingham Palace, taken the day before the Queen’s funeral

A smiling family portrait of the King, his son who is the first in line to the throne and their wives has been released by Buckingham Palace.

The image of King Charles III and his Queen Consort, standing alongside the Prince and Princess of Wales, was taken at Buckingham Palace on September 18, just 10 days after Queen Elizabeth II’s death.

The senior royals are wearing black as the image was taken while they were in mourning for the Queen – leading the nation in grief, but also carrying out official engagements.

Charles, 73, is standing with his left hand held at the top of his pocket, while his right arm is gently tucked around Camilla’s waist.

William, 40, who now towers over Charles, stands proudly next to his father and wife Catherine as all the family group looks straight at the camera and smiles.

The photograph was taken before Charles and Camilla hosted a Buckingham Palace reception for world leaders on the eve of the Queen’s funeral.

The high-powered guest list of presidents, prime ministers and royals from across the globe came together in what the King’s spokesman described as an “official state event”.

US president Joe Biden and his wife, First Lady Jill Biden, were among approximately 500 people in the palace’s main state rooms.

Israel’s president Isaac Herzog, plus France’s president Emmanuel Macron who was joined by his wife, first lady Brigitte, were among those who were invited to the reception for the heads of state and official overseas guests.

Dozens of leaders of Commonwealth countries and members of foreign royal families also attended the reception. Many guests arrived in coaches.

Working members of the royal family including the Earl and Countess of Wessex, the Princess Royal and Vice Admiral Sir Tim Laurence, and the Duke and Duchess of Gloucester joined Charles and Camilla in mingling with guests.

The event took place on the final full day of the Queen’s lying in state at Westminster Hall.

Images were also released on Saturday as Charles carried out one of his first official audiences as monarch since royal mourning ended.

He greeted Ralph Gonsalves, the Prime Minister of St Vincent and the Grenadines, with a friendly handshake and a pat on the wrist as they met at Balmoral in Scotland.

Mr Gonsalves’ wife, Eloise, also attended the event and posed for a picture with the monarch alongside her husband.

The King and his Queen Consort have met the couple on previous occasions, including a visit to the Commonwealth realm as part of their 2019 Caribbean tour.

The couple also attended William and Kate’s wedding reception in 2011.

Charles and Camilla are set to hold their first joint public engagement since royal mourning ended by visiting Dunfermline on Monday to mark it achieving city status.

They will attend an official council meeting at the City Chambers and visit Dunfermline Abbey in celebration of the new city status.

They will also host a reception at Edinburgh’s Palace of Holyroodhouse to celebrate British South Asian communities.

Eight places were made cities, as part of celebrations marking the 70-year reign of the late monarch, after successfully bidding for the honour under the Platinum Jubilee Civic Honours Competition.