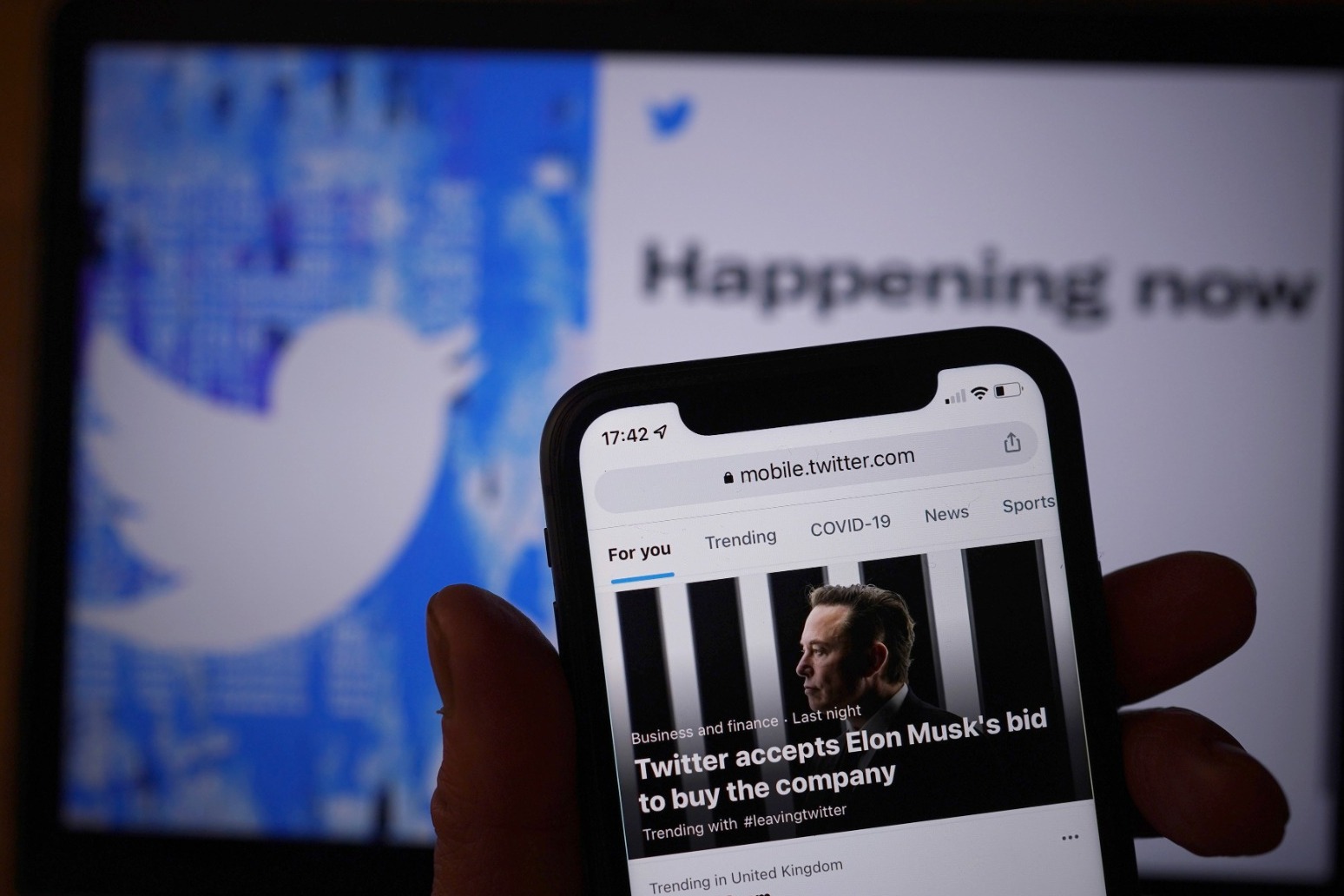 Elon Musk started the year as just a prominent Twitter user, but he ends it as its beleaguered owner set to step down as chief executive after a chaotic two months in charge.

The Tesla and SpaceX owner launched his dramatic takeover bid in April after buying up enough shares to become the site’s biggest shareholder but then rejected a seat on the company’s board.

What followed was six months of public sparring as the billionaire criticised Twitter’s executives, policies, and statistics around spam accounts – at one point walking away from the deal – before a looming court case to settle the issue saw Mr Musk give in and pay the original price of 44 billion US dollars (£36 billion) to take control of the platform.

Before taking over, Mr Musk had said he planned to change Twitter’s content moderation policies to allow for more free speech, arguing it had too often censored people, and said he would allow suspended accounts – including former US president Donald Trump – to return.

Those pledges sparked concern about Twitter’s future, with safety groups warning Mr Musk’s plans would lead to more abuse and misinformation spreading on the site.

In the wake of the takeover at the end of October, researchers reported spikes in hate speech and some users began migrating to other social media platforms.

Meanwhile, the billionaire set about reshaping Twitter into what he saw as a better platform for discourse and a profitable business.

More than half of the company’s global workforce of more than 7,000 was laid off, then an ultimatum was issued to those remaining which told them to agree to more “hardcore” working with longer hours or leave – this prompted further departures.

And Mr Musk’s moderation approach did indeed begin to spark controversy because, as promised, Donald Trump and others were reinstated to the platform, and the Covid-19 and vaccine misinformation policy was scraped.

Then there was the botched rollout of a new paid-for verification feature, allowing anyone to get a blue tick badge simply by paying a monthly fee – which led to a number of fake accounts buying verification and then posing as public figures to spread abusive content.

The flurry of negative headlines started to make advertisers nervous and many paused their spending with the company, something Mr Musk blamed on “activist” safety groups which he claimed were against free speech.

By December, the billionaire’s ability to lead Twitter was being widely questioned, as was the potential impact of the ongoing saga of his general credibility and his other businesses – crucially Tesla and its share price, which had dipped since the Twitter takeover.

Following an incident where a number of journalists had their accounts suspended over their coverage of Mr Musk, for which he was again heavily criticised, the Twitter owner posted a poll asking users if he should step down as head of the platform, adding that he would “abide” by the result.

After an uncharacteristically long silence after the result was confirmed, the Tesla boss returned to Twitter to question the validity of the poll and suggest that only paying subscribers should be able to vote on policy-related polls in the future, before he eventually confirmed he would step aside as CEO as soon as he found someone “foolish enough” to replace him.

The question now is, what next?

It appears Mr Musk will lead Twitter in 2023, but his and the site’s reputation has clearly been damaged by a turbulent few months of controversies, U-turns, and fragmented policy decisions.

Will he be able to find a chief executive willing to work under him? And how much control will Mr Musk still try and wield in policy decisions?

And even if a new Twitter chief does get put in place, can they steady the ship sufficiently to help Mr Musk and his other investors start to see a return on their substantial outlay to take control of the social media giant?