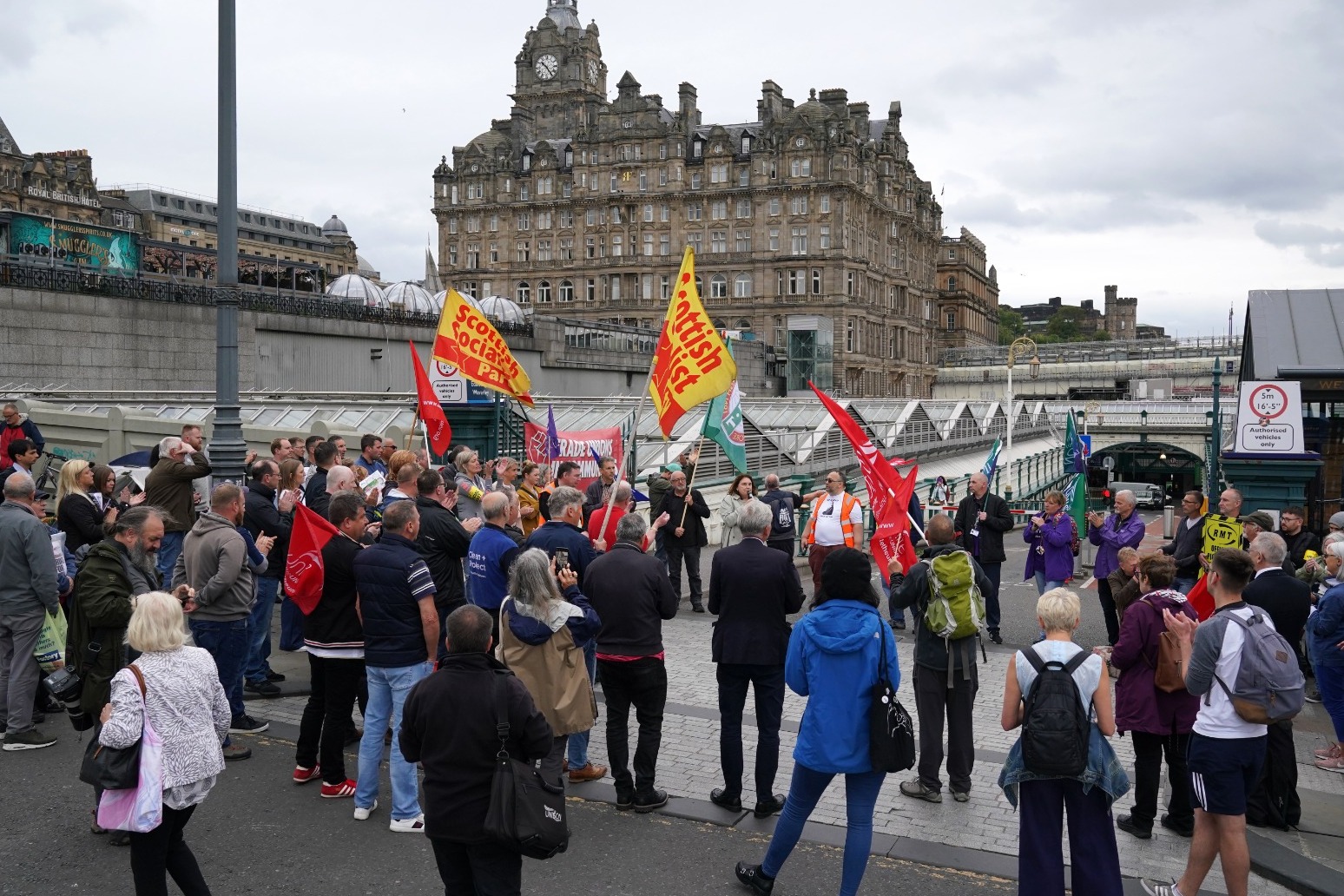 It’s the biggest walk out so far, with four unions taking industrial action together

The Government is being urged to take urgent steps to help resolve the bitter rail row as services are crippled by a mass walkout.

Members of four trade unions are striking for 24 hours, causing the worst rail disruption of the year so far, with some areas of the country having no services all day.

Rail passengers have been advised only to travel if necessary on Saturday because of the strike by members of the Rail, Maritime and Transport union (RMT), Aslef, Unite and the Transport Salaried Staffs’ Association (TSSA).

Mick Whelan, general secretary of Aslef, said his members are increasingly angry at the lack of progress in the dispute.

“We don’t want to be on strike but this dispute will continue until the Government lifts the shackles from the train companies.

“The message I am receiving from my members is that they want more industrial action, so I think more strikes are inevitable.”

Mr Whelan will tell a rally in Birmingham, organised by the campaign group Enough Is Enough: “We would much rather not be in this position. Withdrawing your labour, although a fundamental human right, is always a last resort, but the companies, with the unseen hand of the Government right behind them, seem determined to force our hand.

“They are telling train drivers to take a real-terms pay cut. With inflation now running at 12.3%, they are saying that drivers who have not had an increase for three years should be prepared to work just as hard, for just as long, for considerably less.

“The companies with whom we are in dispute have not offered us a penny, and we think it is outrageous that they expect us to put up with a real-terms pay cut for a third year in a row.”

Railway industry bosses stand to gain up to £61,000 a year from the Chancellor’s tax cuts, more than most RMT members will earn in a year and in many cases twice as much, the union said.

Mr Lynch, who met Ms Trevelyan last month, wrote: “As you know, when we met, I described the meeting as ‘positive’ but the only public statement since then has been from the Chancellor during his fiscal event stating he will be bringing forward legislation to remove rail workers’ right to strike.

“Despite our positive discussion, the Chancellor’s intervention has made an already difficult dispute harder to resolve.

“I am also concerned the Government has recently been taking action that is lining the pockets of the ‘railway rich’ whilst rail workers continue to endure pay freezes and real-terms pay cuts.

“The privatised rail industry is largely dependent on tax-payer subsidy and the Government is using this to support the railway rich in a number of ways, including:

“The highest paid directors of a number of rail companies receiving annual increases in remuneration between 15 – 273%, much of this on the basis of financial results that have been funded by the Government.

“Railway bosses stand to gain up to £61,000 per annum from the Chancellor’s tax giveaway for the better off. These people stand to get more from your Government’s tax cut than most of my members will earn in a year and in many cases twice as much.”

A reduced timetable has been published, showing that just 11% of rail services will run on Saturday, with some areas having no trains.

Trains will start later in the morning and finish earlier in the evening and there will be no trains at all across large parts of the network.

Delegates travelling to the Conservative Party conference this weekend will be among those affected.

Those who must travel – including those looking to participate in or watch the London Marathon – have been advised to plan ahead and check when their last train will leave.

Passengers have also been warned there is likely to be some disruption in the early morning of Sunday October 2 as workers return.

Andrew Haines, Network Rail’s chief executive, said: “Despite our best efforts to compromise and find a breakthrough in talks, rail unions remain intent on continuing and co-ordinating their strike action.

“This serves only to ensure our staff forgo even more of their pay unnecessarily, as well as causing even more disruption for our passengers and further damaging the railway’s recovery from the pandemic.

“Passengers who want to travel this Saturday, and indeed next Wednesday and next Saturday, are asked only to do so if absolutely necessary. Those who must travel should expect disruption and make sure they check when their last train will depart.”

“It is particularly disheartening that this weekend’s strike will hit the plans of thousands of runners who have trained for months to take part in the iconic London Marathon.

“That will also punish the many charities, large and small, who depend on sponsorship money raised by such events to support the most vulnerable in our community.

“While we have done all we can to keep some services running, passengers should only travel by rail if absolutely necessary.”

Transport for London said its services will also be affected by the strikes, with no service expected on London Overground on Saturday and next Wednesday.

Runners and spectators trying to get into the capital in time for the 9.30am start of the marathon in Greenwich on Sunday have been warned they are likely to be frustrated by the strike.

Trains travelling any reasonable distance into central London will not arrive much before 9am.