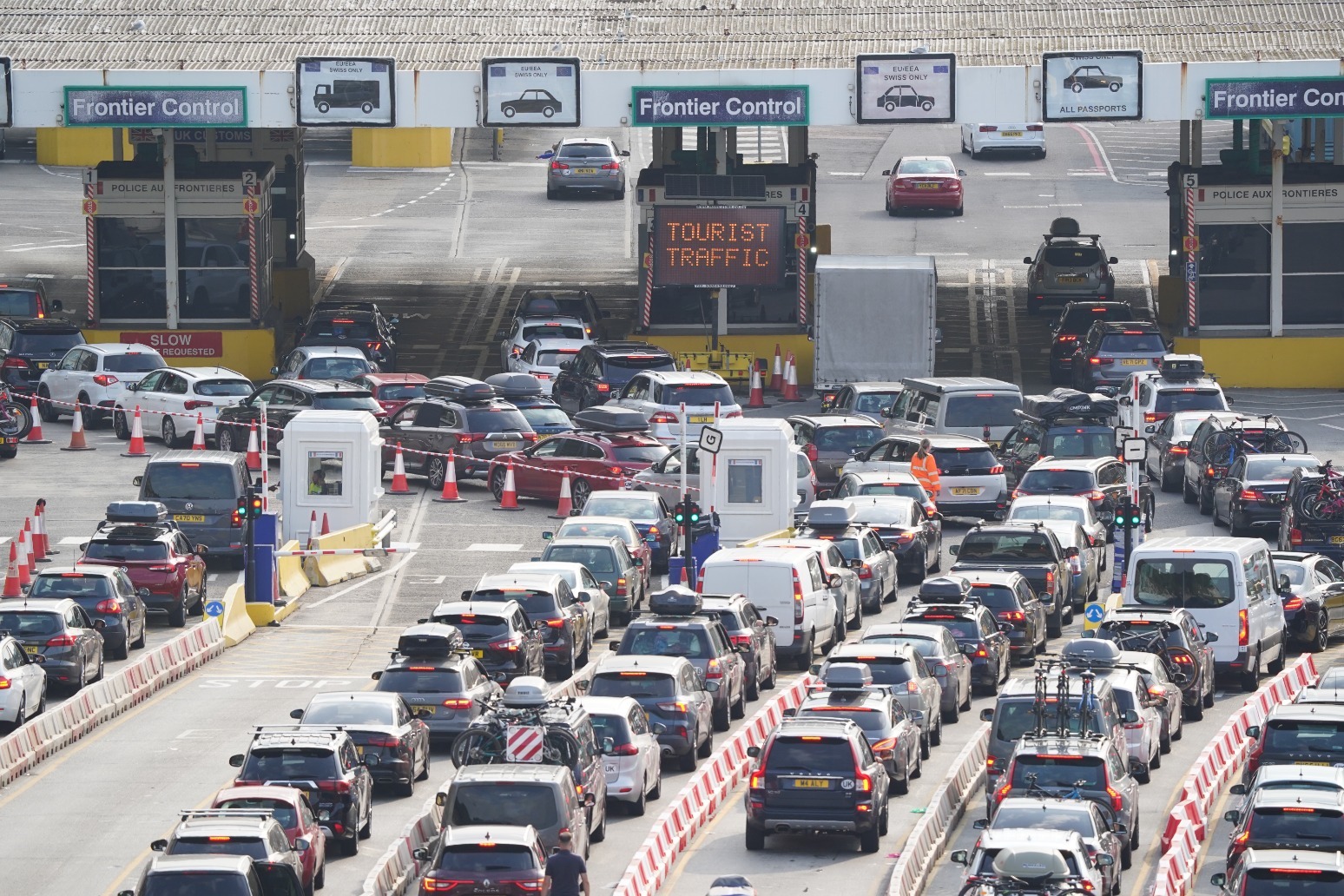 Liz Truss has called on France to act over “entirely avoidable” delays at the border as holidaymakers and lorry drivers face another day of gridlocked roads around Dover.

Lengthy queues were building again on Saturday, following a day of bumper-to-bumper traffic on Friday.

It is one of the busiest periods for foreign travel from the UK as most schools in England and Wales have broken up for summer.

The Foreign Secretary said the delays and queues were “unacceptable”, blaming a lack of staffing by the French at the border.

But a French politician blamed Brexit for the chaos.

Pierre-Henri Dumont, Republican MP for Calais, said the problems at the Kent port would reoccur, telling BBC News: “This is an aftermath of Brexit. We have to run more checks than before.”

Mr Dumont also said the Port of Dover is “too small” and there are too few kiosks due to lack of space.

A “critical incident” was declared by the port due to the queues, with tourists urged to consider staying away, and warnings that Saturday may be just as bad.

She told Sky News: “Today I am hearing the French workers have turned up and they are expected to be manning the booths at capacity but there will be a knock-on effect as there always is when there is an issue that has happened at the ports.

“We are expecting long, long delays today, traffic has already been building up around the town and it is going to be a very serious situation on the roads again in Kent today.”

In a statement, Tory leadership hopeful Ms Truss said: “This awful situation should have been entirely avoidable and is unacceptable.

“We need action from France to build up capacity at the border to limit any further disruption for British tourists and to ensure this appalling situation is avoided in future.

“We will be working with the French authorities to find a solution.”

The chief executive of the Port of Dover said being “let down” by poor resourcing at the French border was “immensely frustrating”.

Doug Bannister stopped short of guaranteeing the backlog would clear in the coming days, but pledged that officials were doing all they could to address issues.

A French official said an “unforeseeable technical incident” in the Channel Tunnel meant that the staffing of border control booths had to be pushed back from 8.30am to 9.45am on Friday morning.

But Eurotunnel’s Director of Public Affairs John Keefe told the BBC that the Tunnel incident had “absolutely nothing to do with problems at the Port of Dover”.

The port said in a statement that it had increased the number of border control booths by 50%.

It went on: “Regrettably, the PAF (police aux frontieres) resource has been insufficient and has fallen far short of what is required to ensure a smooth first weekend of the peak summer getaway period.”

Jack Cousens, head of roads policy for the AA, said: “As the schools closed their doors fully yesterday, Saturday could prove busier still this weekend.

“Drivers should continue to expect disruption and delays on major holiday routes to the south-west, eastern coast and ports of Dover and Folkestone.

“While many have decided to go at the start of the summer holidays, between now and the beginning of September when schools return, each Friday and Saturday will be busy on our roads.

“This is because these are the main switchover days for holiday lets.”

The ferry company said on Friday evening it expects Saturday to be “just as busy”.

Grant Shapps said he was “working closely” with the French transport minister.

The Transport Secretary tweeted: “There’s been severe delays today at Dover & so I’m working closely with my opposite number Clement Beaune to address the issues that caused tailbacks.

“I welcome his commitment that both Britain & France will work closely to minimise further disruption so people can get away quickly.”

On Friday evening, the French Embassy in the UK said French border checks in Dover were “operating in full capacity”, adding that the French authorities were cooperating closely with their British counterparts and all stakeholders responsible for the traffic in the Port of Dover “to enable travellers to make their crossings under the best possible conditions”.