Father Christmas is on the way

Santa Claus is coming to town

Father Christmas will spend tonight on his journey around the world to deliver presents to children everywhere.

He won’t be here in North Oxfordshire until after midnight and needs all the boys and girls to be asleep before he drops off their gifts.   However Santa’s journey starts much earlier in the day.   He leaves the North Pole on his sleigh from Lapland with his trusty reindeer around 11am  (UK time) on Christmas Eve.   He then heads to the South Pacific, with his first stop to the Republic of Kiribati.  He then travels west, delivering presents to those in New Zealand and Australia, and Japan.   After that its Asia, Africa and Western Europe, with North Oxfordshire being one of the final stops on this part of the route.   After us, Santa heads to Canada, the US, Mexico and South America.

Father Christmas is really quick as well.   He has to travel an estimated 510,000,000 km and to do so goes at around 1,800 miles per second.   However, the magic of Christmas means he can visit every young person as long as they are asleep.

Once again this year it is possible to follow Santa’s progress online and two websites offer interactive ways to see where he is.

Throughout the year, the US and Canadian organisation NORAD, monitors aerospace in event of nuclear attack, but when Christmas Eve comes around, they monitor the skies for Santa’s sleigh. 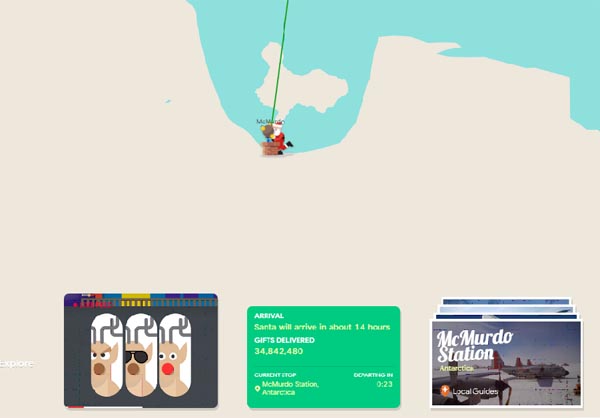 You can see the Norad Santa Tracker here.

You can see the Google Santa Tracker here.

As you await Father Christmas’ arrival don’t forget we are playing your favourite festive music through the Christmas period.