Banbury born and bred, ex-Banbury School pupil Pete went to university in Luton and graduated just as Banbury FM’s first trial broadcast rolled into town back in 2001.   He joined the team and presided over afternoons during our broadcasts in both 2001 and 2002.   It was during this period Pete became infamous for his appalling culinary skills and his ability to set fire to anything in the Banbury FM kitchen!   Hence now being on air well after breakfast and well before lunch.

Pete went on to work alongside Andy Green in The Milestone Group where he oversaw trial broadcasts in other towns around the country and also produced a national chart show.

Pete’s wry sense of humour is well known around these parts, together with his love for the 90s “classic” The One and Only by Chesney Hawkes.   Don’t poke fun at him though – you might not fair too well as Pete is a trained solicitor.

A big fan of Oxford United and Brackley Town, Pete is married with two daughters.   Quite what they think of dad on the radio we are yet to discover. 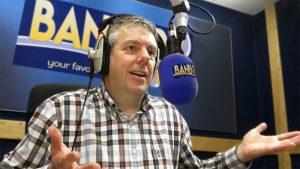