The History of Radio in Banbury

Banbury FM was born in April 2001 after a meeting between Banbury based broadcaster Andy Green and Andy Craig of the Milestone Group.

Having broadcast on Fox FM for ten years Andy had decided to explore the opportunities to bring a local radio station to his home town. Just a few months earlier in a completely separate move Andy Craig had written to the then regulator The Radio Authority expressing an interest in bringing local radio to a number of areas, including Banbury.  A mutual friend, Ian Downs, suggested the two Andy’s meet to see if they could work together.   Andy Craig met Andy Green in April 2001, and Banbury FM was born.

Plans then began for the first ever trial broadcast. This was announced thanks to Julian Dancer, the editor at the Banbury Cake at the time, with a front page news item in August 2001.   A team of local volunteers and industry experts were recruited to form the launch team – amongst them the national TV and radio presenter and local resident John Craven OBE, and former FOX FM presenters Phil Angell and Ian Downs. 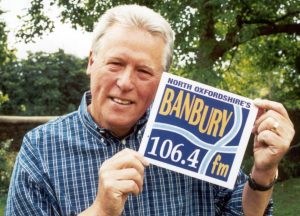 Banbury FM’s first trial broadcast went on-air on 23rd September 2001 for four weeks, based in mobile studios outside Tesco on the northern side of town. 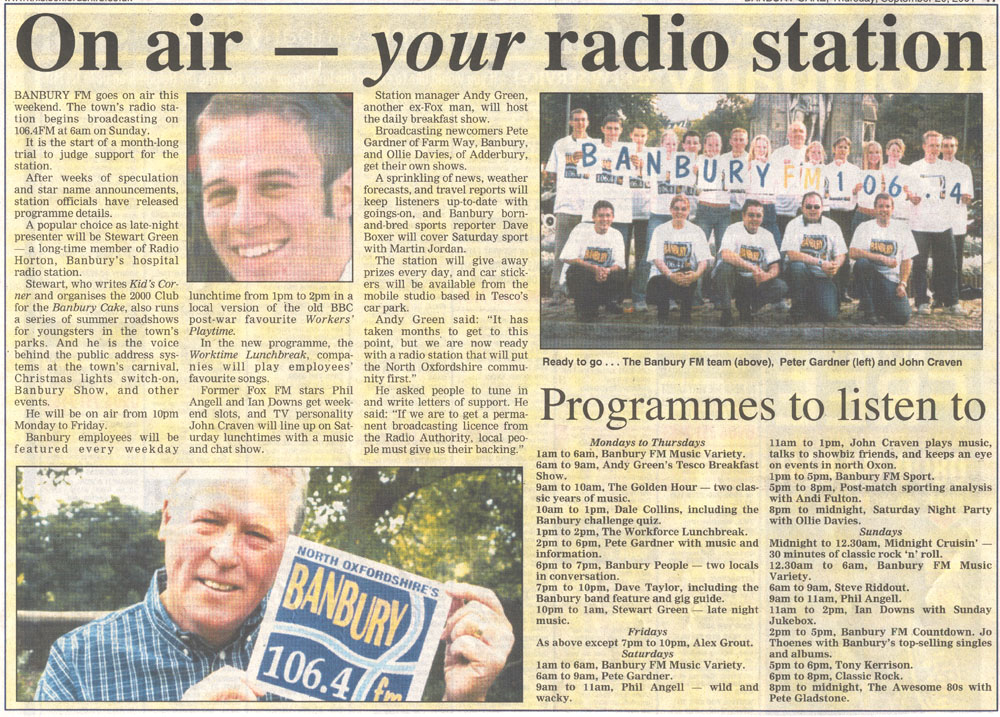 Twenty-eight days later and the broadcast was a hailed a huge success. Independent research showed that in just four weeks an amazing 54% of local people had tuned in to Banbury FM, making it the most listened to radio station in the area. Awareness of the station in Banbury stood at a fantastic 93%.
Motions in support Banbury FM were passed unanimously by both Cherwell District Council and Banbury Town Council. In addition an unprecedented 6,364 letters and signatures on petitions were received urging the Radio Authority to make available a permanent radio licence for a radio station in the North Oxfordshire area.   This had been one of the most successful trial broadcasts the country had ever seen.

In May 2002 the Radio Authority announced North Oxfordshire would get its own radio station! This was a decision that was a direct result of the Banbury FM team’s work and the fantastic support from local people, businesses and organisations. 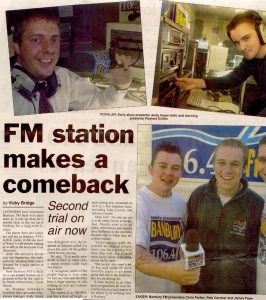 Twelve months after the first broadcast, in September 2002 Banbury FM’s mobile studios returned to Tesco’s car park for a second four week trial broadcast, which began at midnight on Saturday 22nd September.   The on-air team were joined by Bob Dainty who had been an ardent supporter of the first trial broadcast. With his friend Jim he had organised several hundred petition signatures and letters of support for Banbury FM. As a well known Banbury character, Bob was persuaded to bring his love of sixties music to Banbury FM’s schedule.   The team were also joined by Simeon Courtie, the TV and radio presenter, who lived locally and wanted to be a part of his local station.   Again the station was an unprecedented success and a report was submitted to The Radio Authority.

With it now guaranteed that a licence would be awarded in the town, in the spring of 2003 the first sign of any competition for the licence appeared with Laser Broadcasting arriving in town, setting up and running two trial broadcasts as BLR (Banbury Local Radio).  Another competitor was the former online station ImpactLive although they subsequently withdrew from the race.

The advertisement of Banbury licence was delayed until late 2004 after the government replaced the old Radio Authority with Ofcom.   Banbury FM submitted its application before the closing date in February 2005.  Two other groups applied: BLR, and The CN Group, who ran “The Bear” in Stratford.   Whilst lots of local people dismissed this latter application for The Bear for Banbury as a rank outsider, in a move that shocked many in May 2005 Ofcom awarded the licence to CN Radio.

CN Radio subsequently decided to rename their stations as “Touch FM” and launched Touch FM Banbury during February 2006.  However, the station was not a success and in December 2008 they announced they intended to close it.  This led to a buyout by the local Touch FM management team supported by a local property developer.   The now independently owned station was relaunched as Banbury Sound in June 2009. 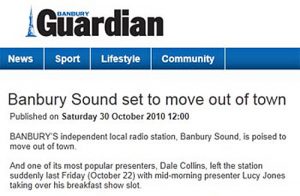 But just over a year later in October 2010 the main investor sold his shares to a media company called Quidem, who had recently purchased a number of other radio stations in the midlands, including the one in Stratford.   Quidem decided to keep the Banbury Sound name, but closed down the local studios and shared presenters with its other stations from their base near Kenilworth.

In September 2011 to celebrate the tenth anniversary of Banbury FM’s first trial broadcast, the station re-broadcast in real time all the programmes from the second trial.   The broadcast using the latest internet streaming technology proved popular and indicated radio through the internet (ip Radio) could in the future become a core method of delivery for radio stations.   A sustaining service with local information ran following the 2002 re-broadcast.

In January 2019 Banbury FM completely relaunched with a team of presenters, many of whom had been part of the earlier trials, or who were well known in the area.   The station started using the latest technology and became one of the first of a new breed of radio stations flourishing without the shackles of preconceived ideas as to what infrastructure is needed to create a successful radio station.   Listeners liked what they heard and with listening to the radio using the internet becoming widely accepted, listening figures leapt up.

In September 2019 Banbury Sound’s owners, Quidem, announced they were entering a brand licencing agreement with the national radio group Global.   They submitted an application to Ofcom to make changes and after these were approved closed down Banbury Sound on November 29, 2019.   Since then the frequency has been used to broadcast the national output of Capital FM.   Initially just three hours of “local” programming were provided from Kenilworth each day Monday to Friday.   In 2021 Quidem sold the station to Global with Banbury’s three hours each weekday of “local” programming moving to studios in Birmingham.

The Future.   Around the country as national brands replace former local stations, those seeking local radio output no longer limited to what they can receive on traditional analogue radio.   Listening to stations delivered via the internet is taking off.   In addition since 2020 Ofcom has been advertising Small Scale DAB licences which will provide local stations an opportunity to be available to DAB listeners.  Banbury FM is a lead member of the NODAB consortium.   With its forward thinking approach, Banbury FM is right at the front of the drive to bring professional, truly local radio to listeners using all the latest technological methods available.