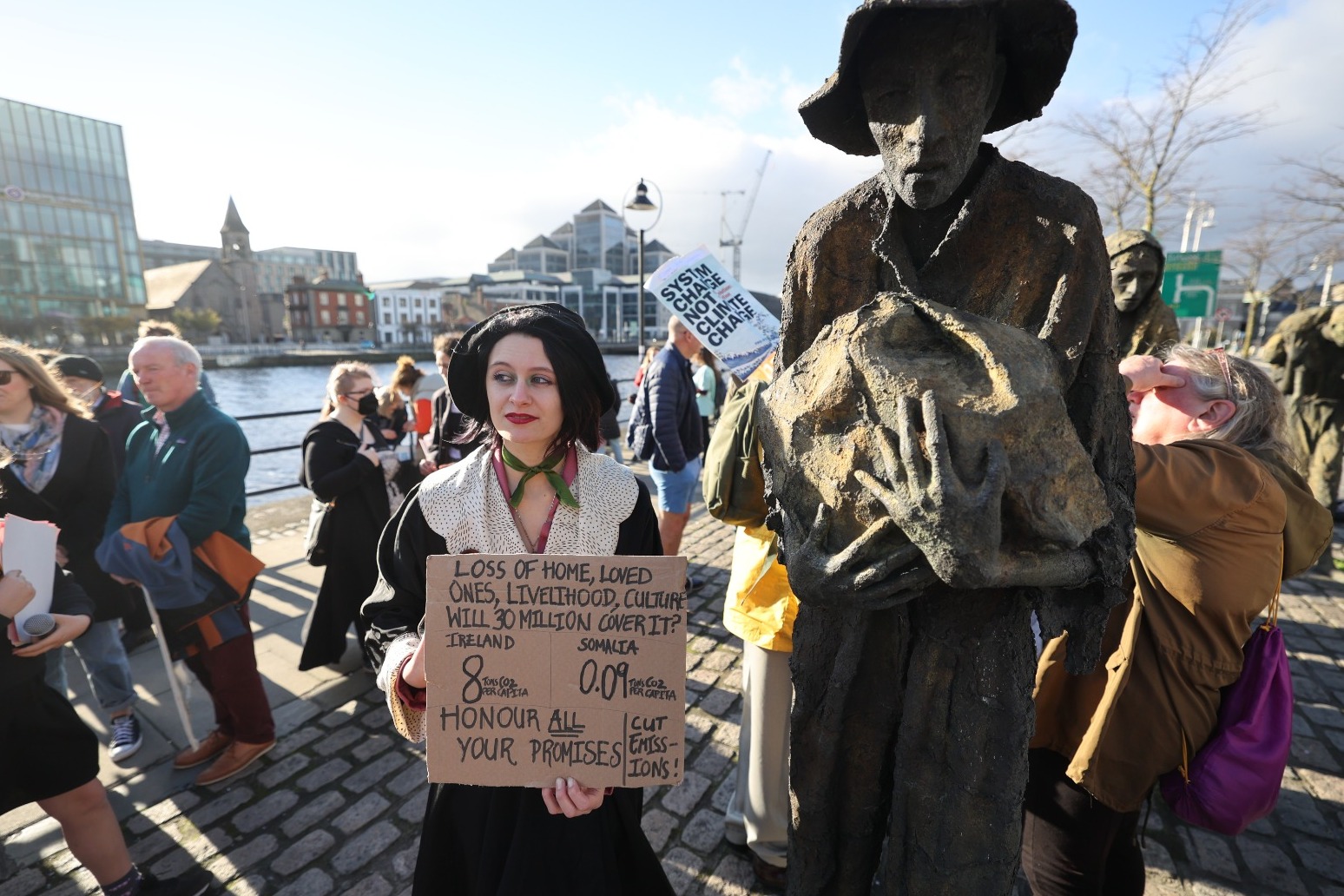 Activists have urged the Irish government to reflect on the country’s own history of famine as they called for more action to help countries facing food shortages exacerbated by climate change.

Campaigners held a protest at the Irish Famine Memorial statues in Dublin during the Global Day Of Climate Action.

The action was organised as governments continue to debate how they tackle global warming at the Cop27 summit in Egypt.

The event at Custom House Quay was organised by the Stop Climate Chaos coalition.

They used it to call on Taoiseach Micheal Martin to pledge more finance to tackle the issue and support the establishment of an international loss and damage finance facility to help the countries worst affected by climate change not of their making.

Campaigners appealed to the Irish government to stand with countries such as Somalia and Ethiopia that are experiencing food shortages brought on by the effects of climate change.

Siobhan Curran, the head of policy and advocacy at Stop Climate Chaos member organisation Trocaire, said: “Given our history of colonisation and famine, we have a unique opportunity to show solidarity with some of the poorest countries in the world who are experiencing massive losses and damage due to the climate crisis.

“They cannot be left to pay the price for a crisis not of their making.

“This is why we are calling for Ireland to stand with communities of the global south – it’s time to answer their calls for a loss and damage finance facility to help deal with the climate impacts that have been caused by the emissions of rich countries like Ireland.”

Simon Murtagh, of Oxfam Ireland, added: “It is urgent that Ireland expresses its support for the establishment of an international loss and damage finance facility without delay.

“The time for quiet diplomacy is over and, as the Taoiseach learned at Cop27 this week, 2.1 million people in Pakistan have lost their homes and are now living under the open sky with no source of food and water. There is no time for further delay.”

“Developing countries cannot be left to pick up the tab and be expected to pay for the huge costs of environmental disasters caused by a climate crisis they did least to create,” he said.

“Wealthy, polluting countries must use Cop27 as the moment to make good on their ecological debt and commit to providing new and additional funding for loss and damage.”

Karol Balfe, chief executive of ActionAid Ireland, said: “Communities and countries on the front lines of climate change are pinning their hopes on Cop27 to deliver the help they urgently need to recover from disasters.

“As the climate crisis escalates, a new UN funding facility to cover the losses and damages caused by floods, droughts, and cyclones would be a game-changer in helping vulnerable countries to avoid deepening debt and poverty.

“It is shocking that after decades of climate negotiations, there is still no financial support provided to countries harmed by climate change.

“The cost of inaction has a detrimental impact on the lives of women and girls being affected for years, decades and even generations to come.”

Stop Climate Chaos policy co-ordinator Dr Brid Walsh added: “The vast majority of loss and damage has been caused by the emissions of rich countries in the global north who are responsible for 92% of excess emissions.

“The recent IPCC reports issued a long list of warnings about the cost to people and our planet of failing to take immediate, deep and rapid climate action.

“At Cop27 countries should significantly ramp up climate finance flows to support poorer countries to cope with the impact of rising global temperatures.

“Ireland needs to do the same, and this finance should be new and additional to existing funding.”