Arsenal beat the champions to win the Community Shield 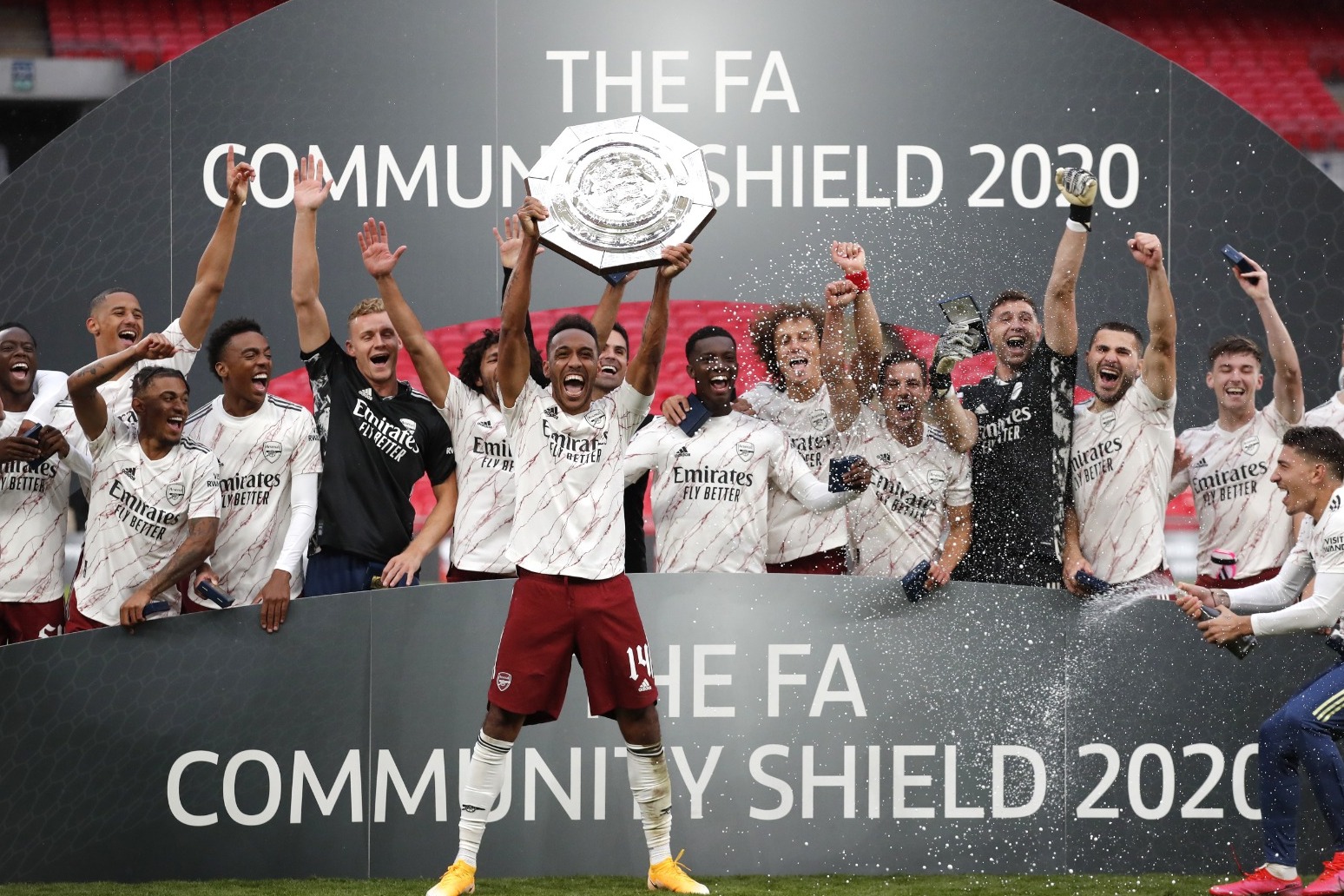 Pierre-Emerick Aubameyang fired Arsenal to their second Wembley win in a month beating Liverpool to lift the Community Shield.

August started with the Gabon forward inspiring the Gunners to a record 14th FA Cup win and ended with him wrapping up a morale-boosting win in the 2020-21 season curtain-raiser.

Aubameyang saw his fine curling effort cancelled out by Liverpool substitute Takumi Minamino as the match finished 1-1, but the Arsenal captain would seal another triumph by scoring the winning penalty in the subsequent shoot-out.

Rhian Brewster missed the only spot-kick as the Gunners won 5-4 on an afternoon that only underlined the need to get their star turn’s new deal over the line.

Aubameyang gave Arteta’s men the lead by ending a fine team move in style and celebrating with the ‘Wakanda forever’ salute in tribute to Chadwick Boseman following the death of the Black Panther actor.

Arsenal dug deep after the early opener but their resolve was broken in the 72nd minute when Minamino slotted home his first goal for the club.

The match went to penalties and Arsenal’s players added their second trophy under Arteta, with Aubameyang coolly sealing the success from the spot.

This match completed a first Community Shield double-header after Chelsea beat Manchester City 2-0 win in the women’s event earlier in the day.

Many would have predicted Liverpool to win this match – considering the Premier League champions’ star-filled starting line-up – and Virgil van Dijk appeared to have put them ahead in the seventh minute.

The Liverpool defender turned a fine Andrew Robertson free-kick past Emiliano Martinez – given the nod ahead of fit again Bernd Leno – but the video assistant referee ratified the on-field offside call.

James Milner screamed in frustration after heading over from close range as the Reds’ bright start continued, only for Arsenal to take the lead with 12 minutes on the clock.

A superb move that started at the back with goalkeeper Martinez ended with the ball being played down the right to Bukayo Saka. The teenager switched the play to Aubameyang, who cut in from the left and curled a superb right-footed strike past Alisson Becker from the edge of the box.

The Gunners stayed on the front foot and came close to doubling their lead soon after. Eddie Nketiah dispossessed Joe Gomez and started a break that ended with the striker getting away a first-time shot from Saka’s cross that Alisson did well to push wide having got down low to his left.

Nketiah’s next effort was well off target and play began to focus in the Arsenal half, with Sadio Mane going down under pressure from Hector Bellerin – only for penalty claims to be ignored.

Jurgen Klopp’s men peppered the box with crosses, some just evading their intended target with others cut out, as Arteta’s men dug deep before the break.

Reported Wolves target Ainsley Maitland-Niles, named man of the match, lifted a shot off target and Roberto Firmino whipped a strike just wide when play resumed, with Martinez superbly blocked a Mane shot with his feet.

Liverpool were knocking at the door and substitute Minamino finally found a way through in the 73rd minute.

The ball bounced around the box as Mohamed Salah and Minamino combined, with the latter steering smartly past Martinez. Arteta led the calls for handball but the VAR allowed the goal after reviewing the footage.

Martinez denied Mane from an acute angle before Arsenal’s late changes saw them finish on top and substitute Joe Willock had the best chance before the final whistle signalled spot-kicks.