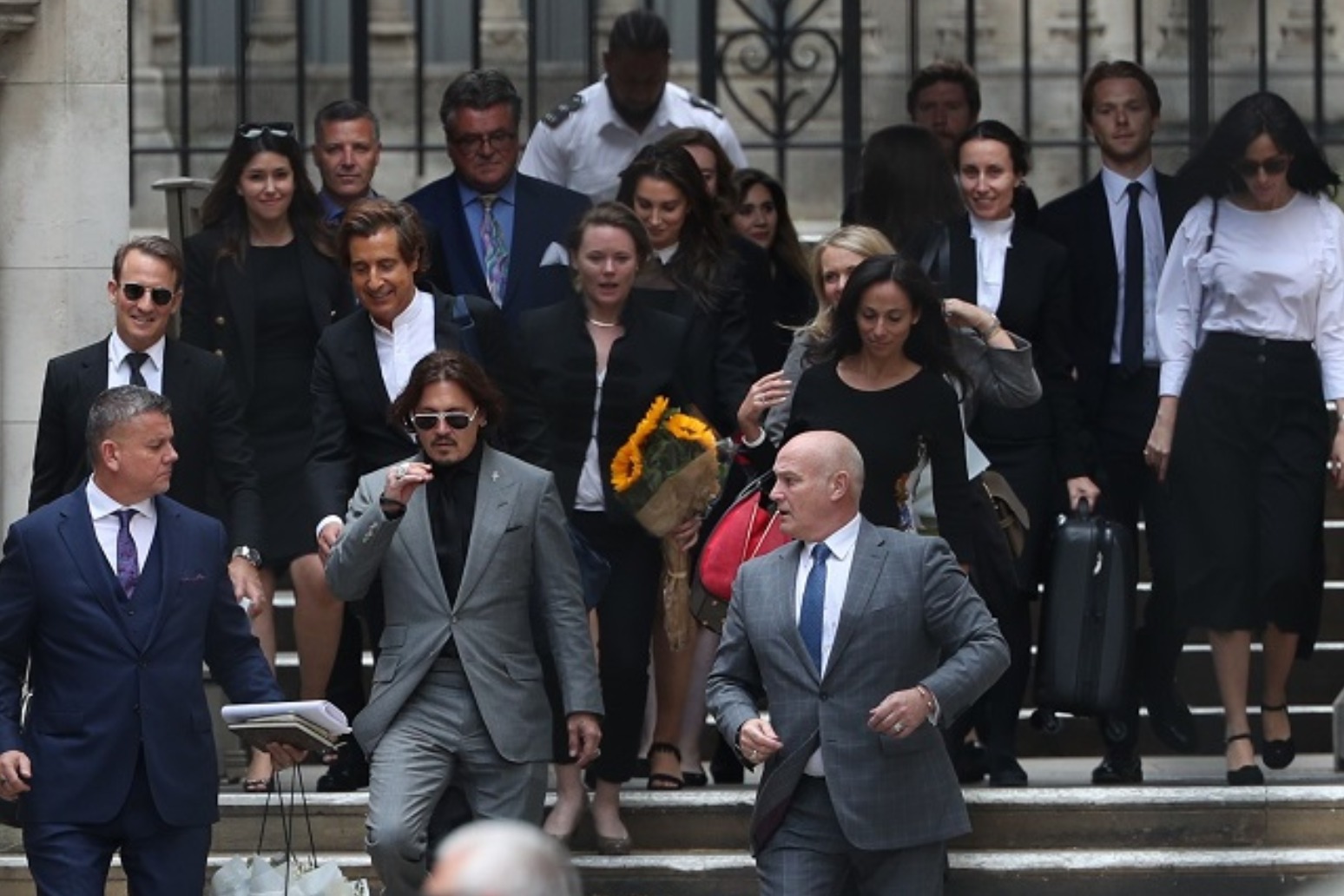 Johnny Depp has lost “nothing less than everything” as a result of “appalling allegations” that he was violent to ex-wife Amber Heard, the High Court was told on the final day of the star’s blockbuster libel action against The Sun newspaper.

It is important to the star to clear his name, his lawyers told the court, saying: “This is not about money, this is vindicating him.”

The comments, made in Court 13 of the Royal Courts of Justice, came as Ms Heard stood on the steps outside and said she stood by her evidence and would “place her faith in British justice”.

The biggest English libel trial of the 21st century ended on Tuesday after three weeks of high drama, claims of brutal violence and sensational revelations about a tempestuous Hollywood marriage.

Mr Depp’s libel action against News Group Newspapers (NGN), publisher of The Sun newspaper, and its executive editor Dan Wootton, over an article which alleged he was violent to Ms Heard and labelled him a “wife beater”, has attracted global media attention.

Day 16 of the trial saw the Pirates Of The Caribbean star, 57, arrive to screams from fans inside the imposing building’s main hall.

In closing submissions his barrister, David Sherborne, said Depp was “no wife beater”.

He accused NGN and Mr Wootton of “acting as both judge and jury”, said the article was “not researched at all”, and that it was presented in a “deliberately and wholly one-sided manner”.

Mr Sherborne also launched a stinging attack on Ms Heard, 34, accusing her of being a “compulsive liar”.

In his final remarks, Mr Sherborne said: “What is important to Mr Depp is clearing his name of these appalling allegations, expanded on as it has been over the last four years, as a result of which he has lost nothing less than everything, he would say.

“When I say he has lost everything, to him obviously everything is his reputation. This is not about money, this is vindicating him.”

Mr Sherborne told the court it is “common ground” that Ms Heard’s credibility is “key”, adding: “It is the defendants who bear the burden of proof.”

“We say from the big points even to the smaller ones, Ms Heard has proven herself to be a wholly unreliable witness and, frankly, a compulsive liar – and I don’t say that lightly.

“Firstly, she has lied about the incidents, tailoring her story to meet the evidence adduced against her, changing dates or splitting incidents where the evidence disproving her account required her to do so rather than admit what is untrue.

“Secondly, she has added further details to incidents, details nowhere referred to in any of the vast amount of documentation gathered in this case.

“Thirdly, Ms Heard has invented incidents, whole incidents, sometimes based around retro-engineering texts, and they have come out of nowhere.”

Earlier, Mr Sherborne had referred to evidence given by Ms Heard that Mr Depp had thrown his former girlfriend Kate Moss down the stairs.

The barrister said: “In yet another moment of unscripted malevolence, she tossed in a total lie… namely that she was scared for her sister and, terrified, punched Mr Depp because in that moment she remembered a rumour about Kate Moss.”

Mr Sherborne said it was a “gratuitous and totally invented” reference to Ms Moss and told the judge there was no better example of “the nature of the witness whose credibility the defendants’ case is so heavily dependent on”.

He said Ms Heard was “financially independent” and was an “actress surrounded by adoring fans”, but nevertheless “got engaged to and married Mr Depp, despite his endless violence, apparently”.

The barrister added: “I’m sorry – there are many, many victims of domestic violence and different situations, but this is a huge disservice to those genuine victims, as well as the MeToo movement, for Ms Heard to count herself as one of them, as she plainly does.”

“He admitted it and, if occasionally he was mistaken or forgot exactly when he stopped taking something… it is quite hard to see why that would make any material difference given how candid he has been about his use of certain substances,” Mr Sherborne said.

“The defendants’ case has to be more than that he took controlled drugs or that he consumed alcohol.”

Mr Sherborne reminded the judge that the burden of proof rests on NGN to prove what it published and said there is a higher standard of proof for the allegations because many are criminal in nature.

The barrister added: “This court requires compelling and cogent evidence before it will find that an allegation that someone is guilty of a serious criminal offence is true.”

Shortly after 4pm, Ms Heard made a statement outside the law courts.

She said: “I did not file this lawsuit and, despite its significance, I would have preferred not to be here in court.

“It has been incredibly painful to relive the break-up of my relationship, have my motives and my truth questioned, and the most traumatic and intimate details of my life with Johnny shared in court and broadcast around the world.

“I stand by my testimony and I now place my faith in British justice.”

On Monday, lawyers for NGN made their closing submissions, with barrister Sasha Wass QC telling the court that the defence is “one of truth, namely that Mr Depp did indeed beat his wife”.

She said: “For the defence of truth to be substantiated, the defendants need to prove on a balance of probabilities that Mr Depp assaulted Ms Heard on at least one occasion.

“During the last two weeks, the defendants have established that many more than one incident of wife-beating took place over the course of the relationship between the claimant (Mr Depp) and Amber Heard.”

Mr Depp is suing NGN and Mr Wootton over the publication of an article on April 27 2018 with the headline: “Gone Potty: How can JK Rowling be ‘genuinely happy’ casting wife beater Johnny Depp in the new Fantastic Beasts film?”

NGN is defending the article as true, and says Mr Depp was “controlling and verbally and physically abusive towards Ms Heard, particularly when he was under the influence of alcohol and/or drugs”.

Mr Justice Nicol reserved his decision. He gave no indication of when he will give his ruling, but it is not expected to be before September.