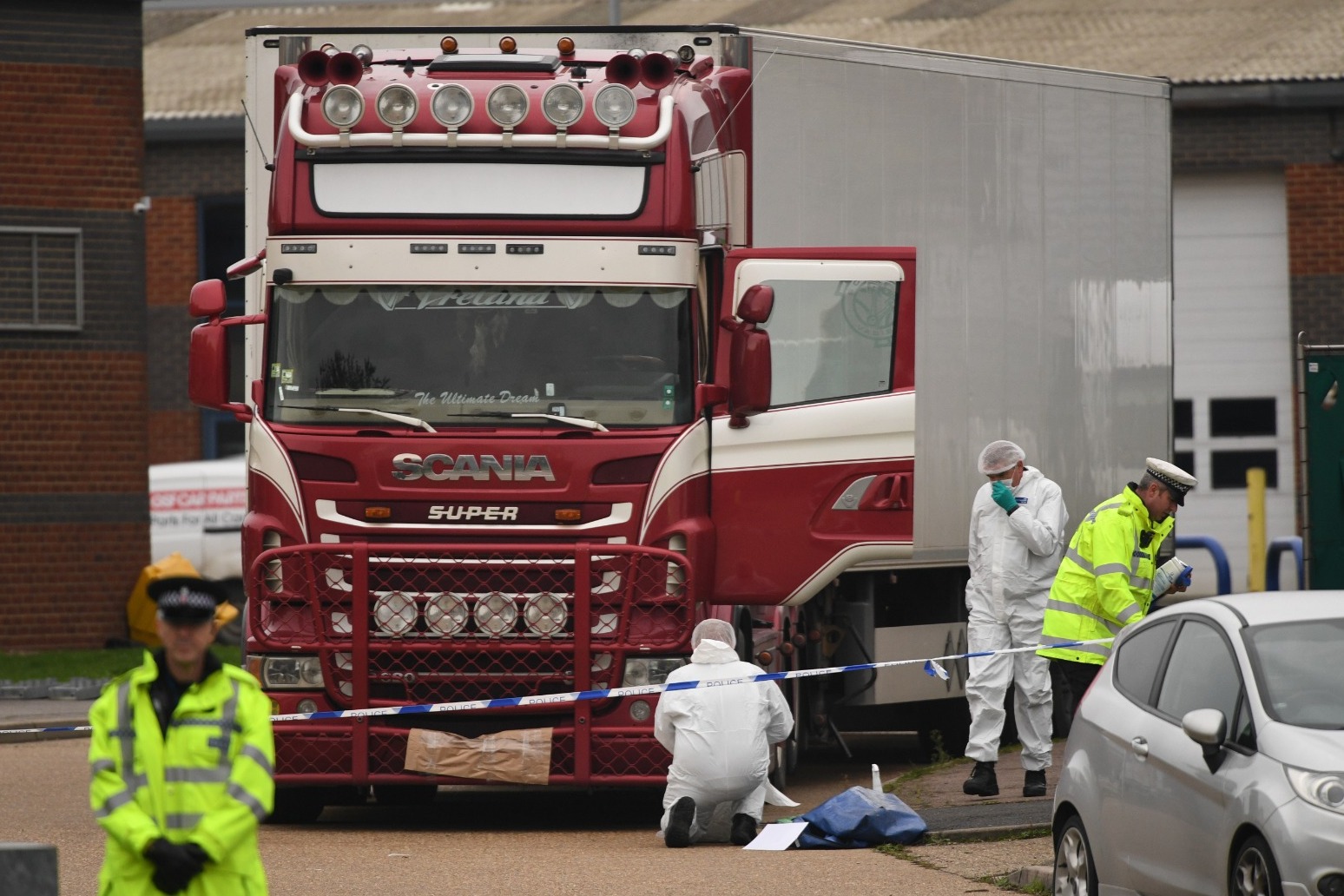 A haulier has pleaded guilty to his part in the deaths of 39 migrants in a trailer on the back of a lorry.

The bodies of the Vietnamese nationals were discovered on an industrial estate in Grays, Essex, shortly after the lorry arrived in Purfleet on a ferry in the early hours of October 23 last year.

Among the men, women and children were 10 teenagers, two of them 15-year-old boys.

An inquest heard their medical cause of death was asphyxia and hyperthermia – a lack of oxygen and overheating – in an enclosed space.

On Friday, haulier Ronan Hughes, 40, from Co Armagh in Northern Ireland, pleaded guilty at the Old Bailey to 39 counts of manslaughter.

He also pleaded guilty to conspiracy to assist unlawful immigration between May 1 2018 and October 24 2019.

It was alleged he played a leading role in the operation, with his trailers and drivers used to transport migrants.

Hughes appeared in the dock alongside Eamonn Harrison, 23, of Mayobridge, Co Down, Northern Ireland, who is alleged to have driven the lorry trailer to the Belgian port of Zeebrugge before it sailed to Purfleet in England.

Harrison pleaded not guilty to 39 counts of manslaughter and one count of conspiracy to assist unlawful immigration.

Harrison and Hughes appeared at the Old Bailey after being extradited from the Republic of Ireland in July.

On April 8, lorry driver Maurice Robinson, 25, of Craigavon in Northern Ireland, who discovered the bodies after transporting the container from Purfleet to an alleged pick-up point in Grays, pleaded guilty at the Old Bailey to 39 counts of manslaughter.

In June, Romanian Alexandru-Ovidiu Hanga, 28, of Hobart Road in Essex, admitted one count of conspiring to assist unlawful immigration between May 2018 and October 2019

During the hearing on Friday, Gazmir Nuzi, 42, of Barclay Road, Tottenham, north London, appeared at the Old Bailey by video link and pleaded guilty to a single charge of assisting unlawful immigration on or before October 11 2019 and April 18 2020.

Harrison now faces an Old Bailey trial on October 5 with three other defendants.

Gheorghe Nica, 43, of Langdon Hills, Basildon, Essex, who is alleged to have been a key player, has previously denied 39 counts of manslaughter and conspiracy to assist unlawful immigration. Valentin Calota, 37, of Birmingham, and Christopher Kennedy, 23, of Co Armagh, Northern Ireland, have denied being part of a people smuggling conspiracy.

Remanding the defendants into custody, Mr Justice Sweeney said the trial would go on for five weeks instead of eight.

A further hearing was fixed for September 21 for a pre-trial review.