PM may be forced into 14 days of self isolation 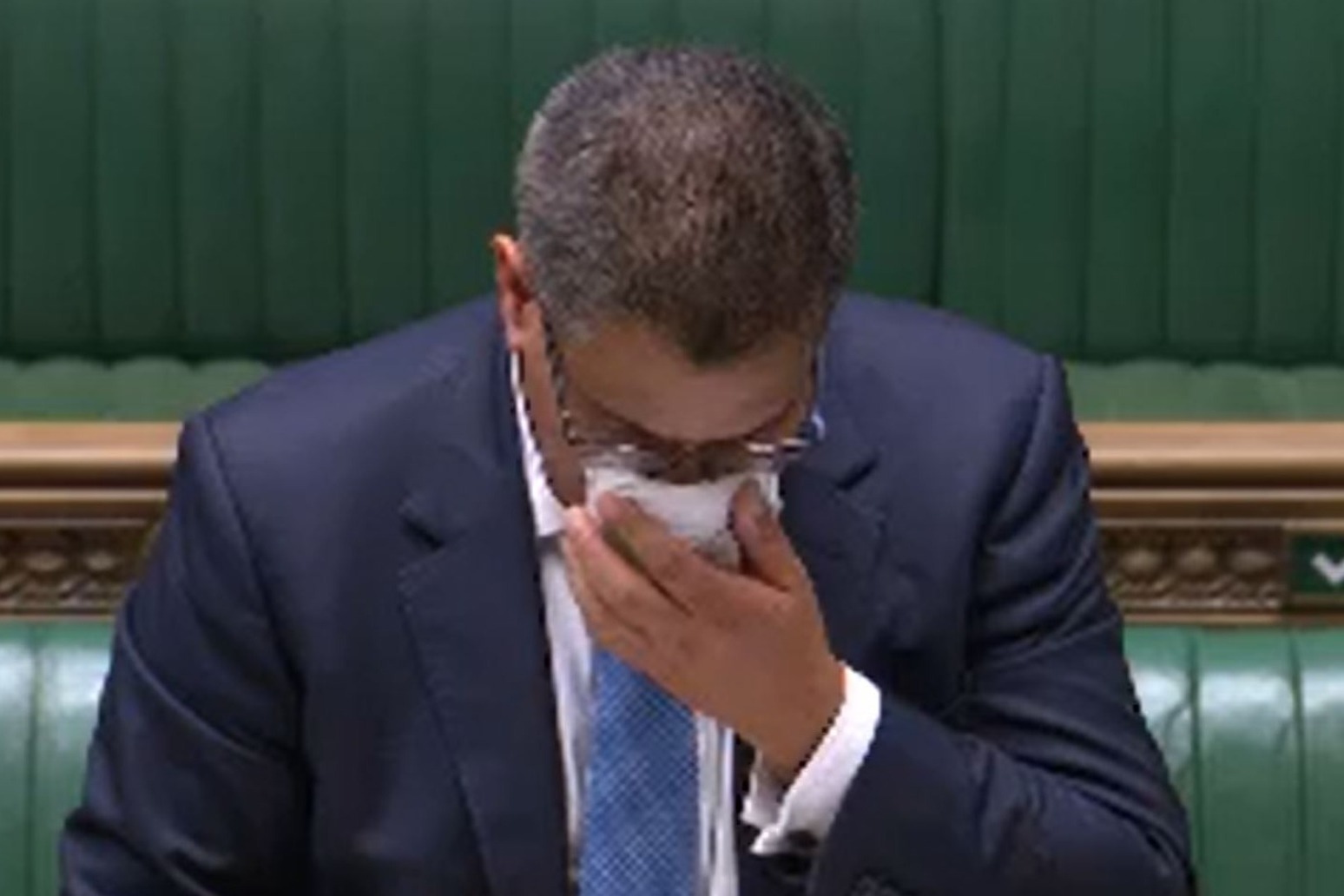 Boris Johnson may have to self-isolate if Business Secretary Alok Sharma tests positive for coronavirus after they met in No 10 this week,

The Prime Minister’s official spokesman said the PM and Chancellor Rishi Sunak held a 45-minute socially distanced meeting on the economy with Mr Sharma on Tuesday.

The spokesman said Mr Johnson would follow medical advice if spoken to by contact tracers who would begin their work if Mr Sharma’s test for Covid-19 comes back positive.

Downing Street said the Government was not reconsidering its move to end virtual voting in the Commons, despite the Business Secretary appearing visibly ill in the chamber on Wednesday.

The spokesman said: “He does not yet have his test results. Should the Secretary of State receive a positive test then he will work with the test and trace service to share information about his recent interactions.

“He did attend a meeting in No 10, which took place before Cabinet. That was a discussion on the economy and in terms of who was present, it was the Prime Minister, the Chancellor and the Business Secretary.”

He stressed the meeting took place with two-metre distancing in place and pointed towards the Government guidelines on how the tracers operate, which include asking individuals whether they had been to a workplace recently.

The spokesman confirmed that even those who have had Covid-19 must isolate and, when pressed on whether the PM would self-isolate if told to, he said: “I would expect us to take medical advice and to follow it.”

As a way of slowing the virus’s spread, contact tracers with the NHS service are asking infected individuals who they have come into recent contact with.

Tracers will then decide whether it is necessary to tell those contacts to self-isolate for 14 days from their last contact with the individual, as a precaution.

Mr Sharma was tested for Covid-19 and entered self-isolation after he was seen mopping his brow while struggling at the despatch box during the second reading of the Corporate Insolvency and Governance Bill.

The PCS union, representing about 800 of Parliament’s clerks, security guards and kitchen staff, wrote to the the PM highlighting the case in saying the decision to end virtual voting was endangering the workers.

“We believe Parliament has opened too soon and the lives of PCS members, and those of our sister unions, are being put at risk unnecessarily,” general secretary Mark Serwotka wrote.

Northern Ireland Secretary Brandon Lewis stressed it was too early to suggest Mr Sharma has definitely contracted the virus.

“I don’t want to be premature because Alok, who I wish well and hope he recovers quickly, may well have had severe hay fever, we’re not sure yet,” he told BBC Radio 4’s Today programme.

“He has had a test, he is self-isolating as you say, to take the correct precaution.”

The feared case of Covid-19 in the chamber came a day after MPs approved the Government’s plan to end virtual voting in the Commons, prompting renewed calls for the system to return.

MPs on Thursday will debate a motion from Commons Leader Jacob Rees-Mogg to allow those who are shielding and those aged over 70 to vote by proxy, in a move Labour dubbed a “U-turn” and described as “chaotic”.

Senior Conservatives, opposition groups and the equalities watchdog raised concerns the decision to end digital voting would prevent many representatives, particularly the elderly and vulnerable ones who are shielding, from being able to vote.

But Mr Lewis denied that Mr Sharma’s case supported the argument for virtual voting in the Commons to be resumed.

“It is important for parliamentarians to be able to properly scrutinise legislation, not just for Covid but for the wider legislative agenda we have to continue with for people across the country, but to do so within proper guidelines,” he said.

Labour shadow minister Toby Perkins said: “If there are now fears that he may have Covid-19 and he hadn’t already tested negative, it was the height of irresponsibility for him to be in Parliament sniffling, sweating and snorting from the despatch box.”

Chaotic scenes unfolded this week when MPs had to form a long queue snaking through Parliament so they could maintain social distancing while voting on the motion to return to physical voting.