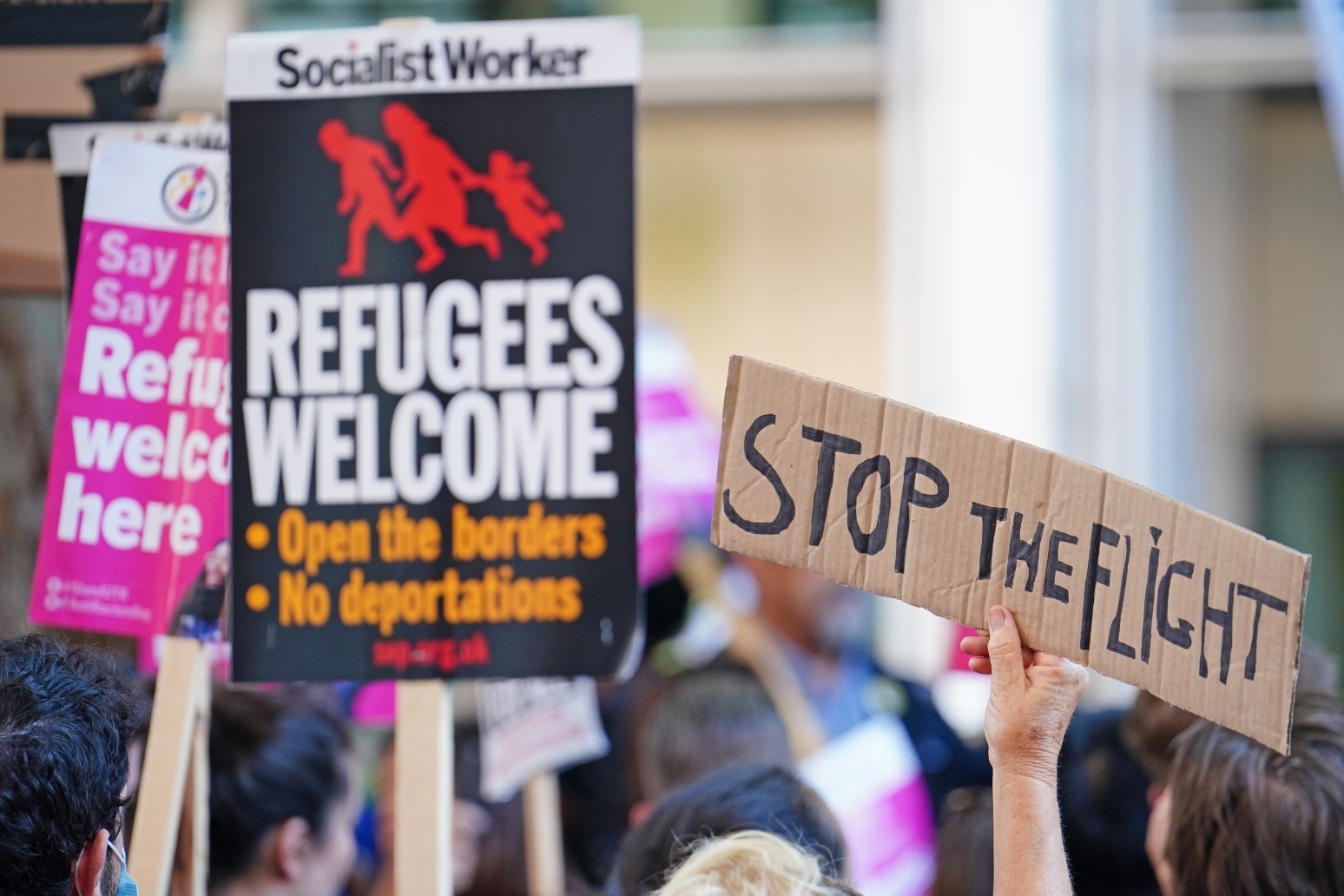 The plan’s being condemned by the Archbishops of Canterbury and York, who say it’s ‘an immoral policy which shames Britain’

The first flight taking asylum seekers to Rwanda is set to leave the UK after a last-ditch legal bid to halt the controversial deportation policy failed.

The archbishops of Canterbury and York joined opposition parties in condemning the plan, describing it as “immoral” and saying that it “shames Britain”.

A Government spokesman however insisted the policy was compliant with Britain’s national and international obligations and was necessary to combat the activities of the human trafficking gangs.

Ministers argue that only firm action will deter migrants from continuing to attempt the dangerous Channel crossing to try and reach the UK.

On Monday three Court of Appeal judges upheld a High Court ruling last week that the removals could go ahead, rejecting an appeal by two refugee charities and the Public and Commercial Services union (PCS).

But it was unclear how many asylum seekers would be on the aircraft with individual appeals against deportation which are expected to continue on Tuesday morning.

While 11 migrants are expected to be removed, one of the charities that brought the appeal said just seven still had live tickets.

Care4Calais said that altogether, there are 24 individuals the Government wants to remove whose tickets have been cancelled.

Three further challenges brought by individuals who face removal on the first flight are expected to be heard at the High Court on Tuesday.

A Government spokesman acknowledged that further legal challenges and last-minute claims could be expected, but insisted it would press on with the policy.

“We welcome the court’s decision in our favour, and we will now continue to deliver on progressing our world-leading migration partnership which will help prevent loss of life and break the business model of vile people smugglers,” the spokesman said.

“Rwanda is a safe country and has previously been recognised for providing a safe haven for refugees – we will not be deterred in delivering our plans to fix the broken asylum system which will ultimately save lives.”

“The shame is our own, because our Christian heritage should inspire us to treat asylum seekers with compassion, fairness and justice, as we have for centuries,” it said.

The letter was also signed by the bishops of London, Durham, Exeter, Birmingham and Manchester.

After an urgent hearing in London on Monday, three senior judges dismissed the appeal, saying there was no error in the decision of Mr Justice Swift in the High Court on Friday.

Lord Justice Singh, sitting with Lady Justice Simler and Lord Justice Stuart-Smith, said Mr Justice Swift had “conducted the balancing exercise properly” and did not err in principle or in the approach he took.

Detention Action, the other charity involved in the appeal, said it was “disappointed” with the ruling but would continue to press ahead with a full legal challenge to the policy due to be heard next month.

“Throughout these injunction hearings, we have heard powerful evidence against this policy and we are confident that, when our full legal challenge is heard in the High Court in July, this Government will be forced to abandon this policy and bring back anyone who is ultimately removed,” said deputy director James Wilson.