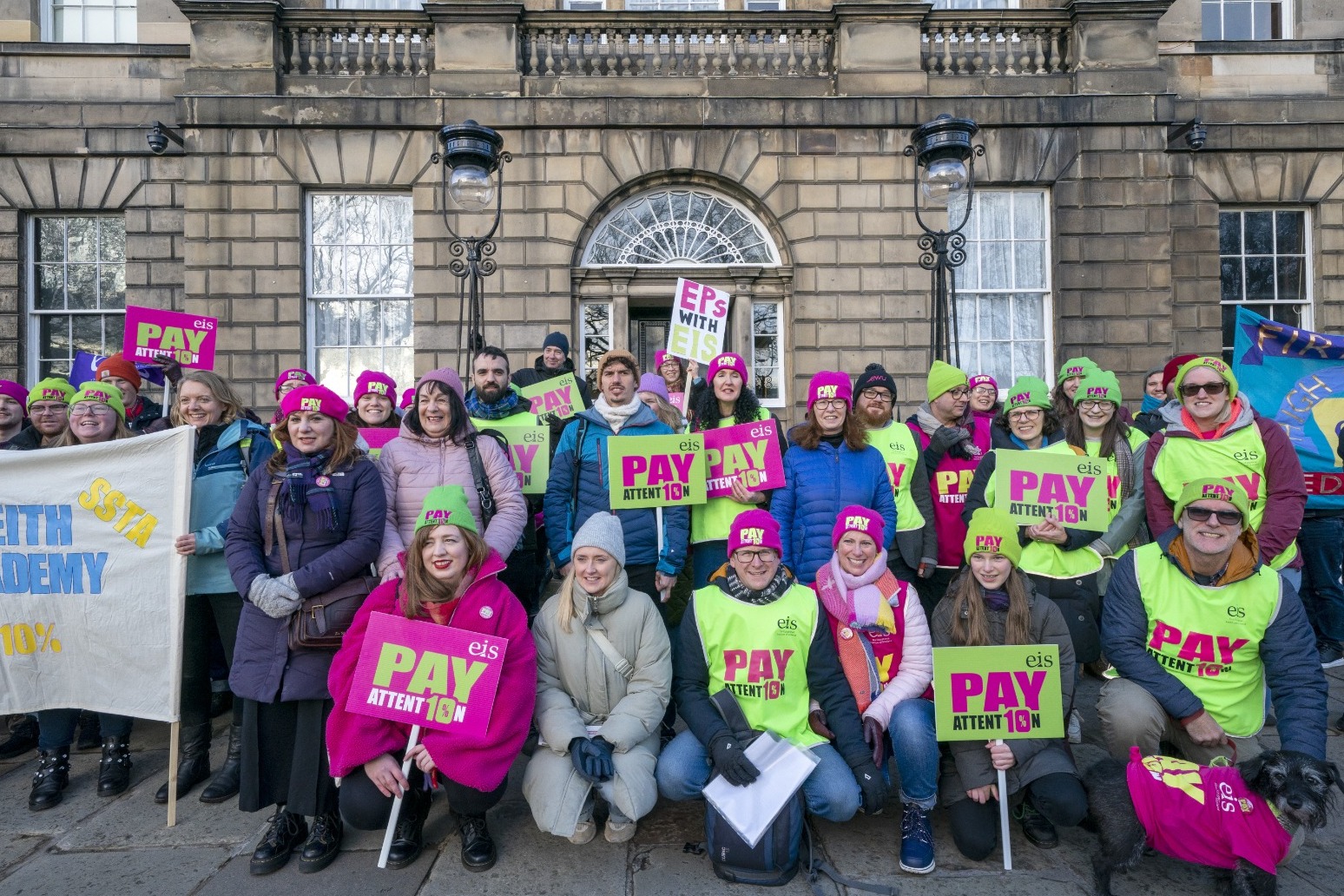 Schoolchildren will miss more lessons this week as teachers take further strike action in the continuing dispute over pay.

Schoolchildren will miss more lessons this week as teachers take further strike action in the continuing dispute over pay.

Members of the Educational Institute of Scotland (EIS) union are beginning 16 days of rolling strike action on Monday, with teachers in two of Scotland’s 32 local authority areas walking out each day until February 6.

The first two councils affected are Glasgow, where all schools are closed on Monday, and East Lothian where they are shut to all pupils apart from those taking preliminary exams that day.

The action is going ahead after talks on Thursday involving the Scottish Government, local authority leaders and teaching unions failed to resolve the issue.

Members of the Association of Headteachers and Deputes in Scotland (AHDS) union are also beginning 16 days of rolling strikes from Monday, mirroring the EIS action.

EIS members have previously taken three days of strike action, one in November and two in January, while members of other teaching unions also walked out on those days in January and on two dates in December.

Unions have rejected a pay offer which would see most teachers receive a 5% wage rise, although the lowest earners would get an increase of 6.85%.

Scotland’s Education Secretary Shirley-Anne Somerville has insisted the 10% teachers are demanding is unaffordable.

The EIS on Friday announced a further 22 days of strike action, starting at the end of February, in an escalation of the dispute.

EIS general secretary Andrea Bradley said: “The recent days of strike action by Scotland’s teachers have succeeded in bringing the Convention of Scottish Local Authorities (Cosla) and the Scottish Government back to the negotiating table – but they have yet to put a single extra penny onto that table.

“Scotland’s teachers rejected a sub-inflationary 5% offer six months ago, and little or no progress has been made in negotiations since.”

She said that the prospect of 22 additional days of strike action, on top of the 16 days of rolling action beginning this week, “should signal clearly to the Scottish Government and Cosla that they must now act with urgency”.

She added: “Our members are resolute and determined to secure a fair pay settlement, which both properly reflects their value and also takes account of the soaring cost of living.”

Schools around the country were shut as members of the EIS, NASUWT, Scottish Secondary Teachers’ Association (SSTA) and AHDS took strike action on January 10 and 11.

It came after SSTA and NASUWT members took two days of strike action in December while EIS members walked out on November 24.

The SSTA has warned of further strikes unless the Scottish Government puts forward a suitable pay offer.

The NASUWT said it is awaiting an improved pay offer from Cosla and the Scottish Government – but said that if this is not forthcoming, further action will be considered.

Ms Somerville said: “Strikes in our schools are in no one’s interest – including for pupils, parents and carers who have already had to deal with significant disruption over the past three years.

“It is disappointing that the EIS has proceeded to escalate industrial action – we are continuing to urge teaching unions to reconsider their plans while talks are ongoing.

“Recent discussions have been constructive. There has been a shared understanding that talks have been focused on discussing potential areas for compromise – not on tabling a new offer at this stage.

“To date we have made four offers, all of which have been rejected, but we remain absolutely committed to reaching an agreement on a pay deal that is fair and sustainable for all concerned.”

After talks on Thursday failed to resolve the issue, Councillor Katie Hagmann, Cosla resources spokesperson, said: “Cosla leaders are clear that given the financial pressures being faced it remains the case that the 10% ask of the trade unions remains unaffordable and therefore we still remain a distance apart in terms of a settlement.”