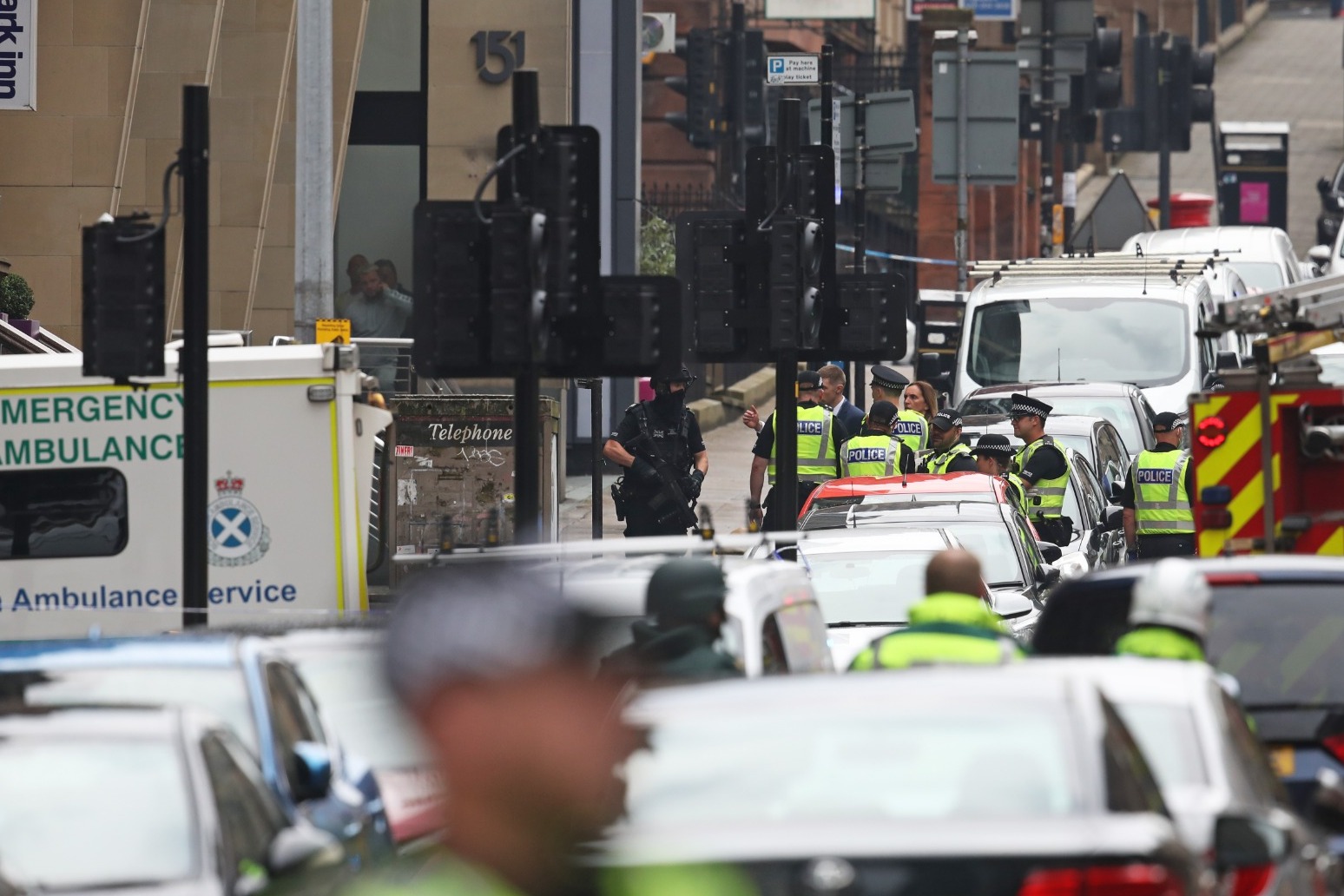 A suspect has been shot dead by police after six people were injured, including an officer, during a major incident at a hotel housing refugees in Glasgow.

Police Scotland said a male suspect was shot by an armed unit and an officer is in a critical but stable condition.

The Scottish Police Federation (SPF) confirmed a male officer had been stabbed and their family has been informed.

All six injured people, including the officer, are being treated in hospital.

Police said there is no danger to the public, with officers in attendance in West George Street in the city centre on Friday afternoon.

Images on social media appeared to show armed police entering a building and a large number of emergency vehicles outside.

The incident appeared to happen at the Park Inn Hotel in West George Street.

Positive Action In Housing said the hotel was housing refugees for the Mears group.

In a statement on Twitter, assistant chief constable Steve Johnson said: “The individual who was shot by armed police has died.

“Six other people are in hospital for treatment to their injuries including a police officer, who is in a critical but stable condition.

“We are continuing to deal with the incident on West George Street #Glasgow and would ask people to avoid the area.

“We would urge the public not to speculate about this incident or share unconfirmed information on social media.”

In an earlier tweet, he said the incident had been contained and the wider public were not at risk.

“I would like to reassure the public that at this time we are not looking for anyone else in relation to this incident,” he said.

David Hamilton, SPF chairman, said: “Whilst there is understandable and considerable public interest in the major incident in Glasgow earlier today, our focus at this time is in assisting the family of our colleague who has been seriously injured.

“This is obviously an anxious time for them and we ask that they be left alone as their attentions are very obviously directed towards the care of their loved one.

“Our thoughts, prayers, and best wishes are with our colleague, his family and friends, and all colleagues affected by this incident at this time.”

One witness, who gave his name as John, told the PA news agency he saw two people stabbed in the hotel.

He said he came down from the third floor of the hotel to see the reception covered in blood.

“When I went to the entrance I saw another receptionist was fighting for his life and had been stabbed.

“There were two police officers their assisting him.”

Witness Craig Milroy, who saw the aftermath of the incident from an office building nearby, said he had seen four people taken away in ambulances.

He told the PA news agency: “I saw a man lying on the ground, of African descent, with no shoes on.

“He was on the ground with someone holding his side – I don’t know if it was a bullet wound, a stab wound, or what it was.”

Mr Milroy said the man was one of the four taken away by medics and believed him to be a victim of an attack.

He added: “After that we saw commotion, ambulances further up and we saw armed police all running into the hotel next to the Society Room.”

Scotland’s Justice Secretary Humza Yousaf urged people not to speculate on the incident.

He tweeted: “I cannot emphasise this enough – please do not speculate on any of the details around the Glasgow incident. I have seen many press reports – all well intentioned I am sure – that are, as things stand, inaccurate. Please follow @GreaterGlasgPol & @policescotland for accurate info.”

Prime Minister Boris Johnson tweeted: “Deeply saddened by the terrible incident in Glasgow, my thoughts are with all the victims and their families. Thank you to our brave emergency services who are responding.”

Labour leader Sir Keir Starmer tweeted: “Extremely concerning reports about an incident in the West George Street area of Glasgow. My thoughts are with all of those who are involved. Please follow the @GreaterGlasgPol advice and avoid the area.”