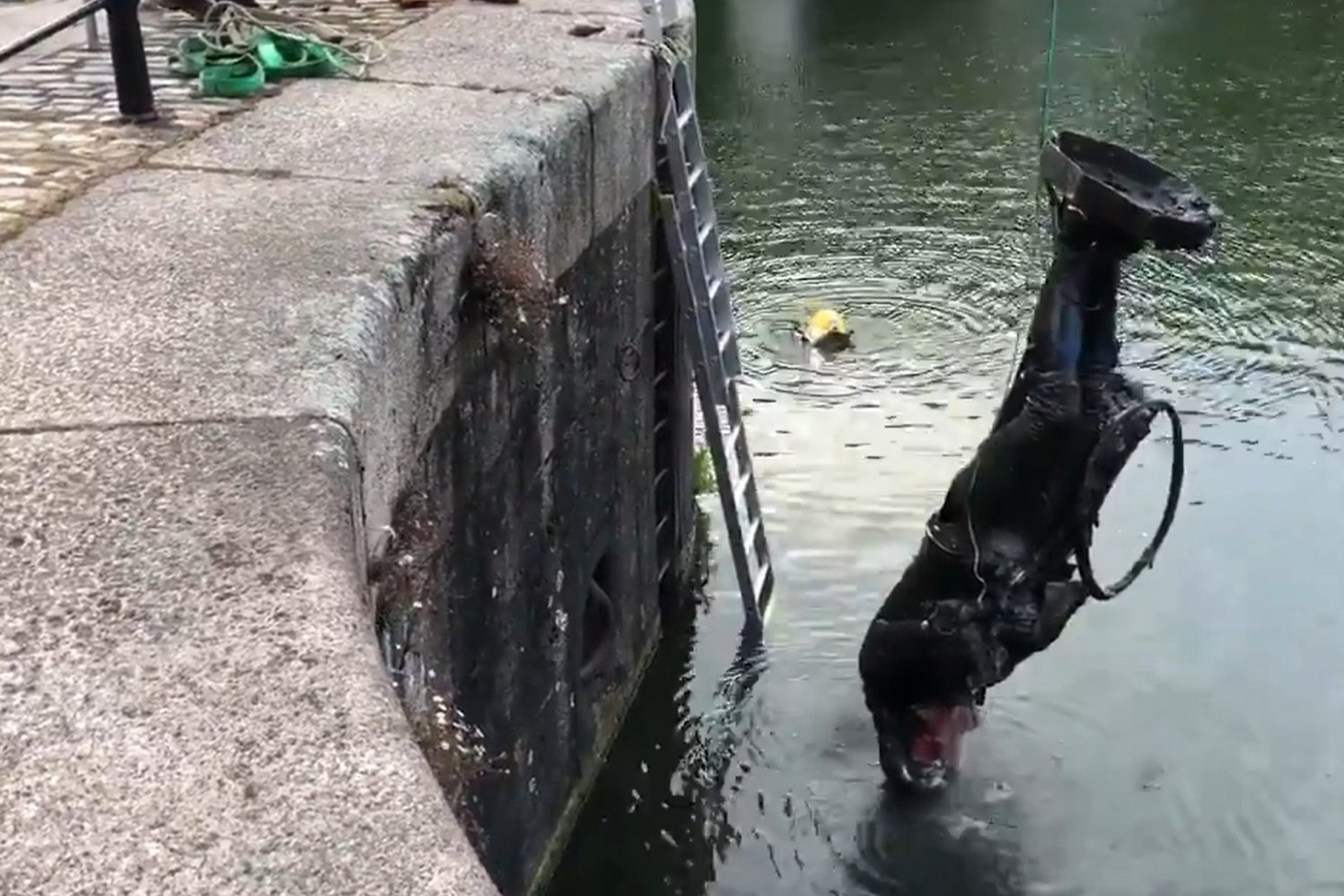 The statue of slave trader Edward Colston that was pulled down during an anti-racism demonstration has been lifted out of Bristol Harbour.

Bristol City Council posted a video clip on Twitter of the monument being fished out of the water on Thursday morning.

It tweeted: “Early this morning we retrieved the statue of Colston from Bristol Harbour.

“It is being taken to a secure location before later forming part of our museums collection.”

It comes after Bournemouth, Christchurch and Poole Council said it planned to temporarily remove a statue of Scouts founder Robert Baden-Powell from Poole Quay on Thursday over concerns it may be targeted by protesters.

The council said it wanted to “minimise the risk of any public disorder or anti-social behaviour that could arise were the statue to remain in situ” while views on Lord Baden-Powell are shared.

Council leader Vikki Slade said in a statement issued on Wednesday: “Whilst famed for the creation of the Scouts, we also recognise that there are some aspects of Robert Baden-Powell’s life that are considered less worthy of commemoration.

“Therefore, we are removing the statue so that we can properly involve all relevant communities and groups in discussions about its future, including whether a more educational presentation of his life in a different setting might be more appropriate.”

Ms Slade said on Twitter that the decision was taken following a “threat”, adding: “It’s literally less than three metres from the sea so is at huge risk.”

The statue was installed in 2008 and faces Brownsea Island in Poole Harbour, where the Scout movement was started by Lord Baden-Powell.

The council said it would be “put into safe storage” and that Dorset County Scouts “have been advised and support the position”.

A spokesman for the Scouts said the organisation was aware that the statue was being removed.

“We look forward to discussing this matter with Poole Council to make an informed decision on what happens next,” he said.

“Baden Powell was the founder of the Scout movement. Currently there are over 54 million scouts in the world and we operate in almost every nation on earth promoting tolerance and global solidarity.

“The Scout movement is resolute in its commitment to inclusion and diversity and members continually reflect and challenge ourselves in how we live our values.”

In 2010, declassified MI5 files revealed that Lord Baden-Powell was invited to meet Adolf Hitler after holding friendly talks about forming closer ties with the Hitler Youth.

Writing on Twitter, Tobias Ellwood, Tory MP for Bournemouth East, appeared to criticise the way in which the statue removal decision was reached.

He tweeted: “A wider overdue national debate has begun about who we were, who we are & where we should go.

“Few historical figures comply with 21st C values. Simply expunging past connections from sight won’t correct wrongs or help us better learn from our past.”

Sir Robert Syms, Conservative MP for Poole, tweeted that he was “opposed” to the permanent removal of the statue.

The Tory MP for Bournemouth West, Conor Burns, tweeted that the removal was “a huge error of judgment” and urged authorities to “put it back”.

Bristol Mayor Marvin Rees has previously confirmed that the Colston statue will be exhibited in a museum, alongside placards from the Black Lives Matter protest.

A decision on how the statue’s empty plinth will be used will be decided through democratic consultation, he said.

The statue was pulled down on Sunday amid worldwide protests triggered by the death of George Floyd.

Mr Floyd died after a white police officer held him down by pressing his knee into his neck for almost nine minutes in Minneapolis on May 25.

Pressure continues to mount on authorities to remove contentious monuments, with Labour-led councils across England and Wales agreeing to work with their local communities to look at the “appropriateness” of certain monuments and statues on public land and council property.

The Colston statue’s retrieval comes after a senior Labour MP said its forced removal was the result of years of frustration with the democratic process.

Speaking on ITV’s Peston on Wednesday, shadow foreign secretary Lisa Nandy said people decided to take action over the memorial because they felt their voices on racial issues were not being heard.

She said: “Why was that statue removed in the way that it was removed?

“Because, for 20 years, protesters and campaigners had used every democratic lever at their disposal – petitions, meetings, protests, trying to get elected politicians to act – and they couldn’t reach a consensus and they couldn’t get anything done.

“Now this is reflective of what has happened to people of colour in this country and across the world for a very long time. We’ve had seven reviews into racial discrimination in this country in the last three years alone, and very few of those recommendations have been acted on.

“That is why people are so frustrated, and that’s the question we should be asking ourselves, is why is it so difficult for so many people to actually be heard and to pull the democratic levers to get the democratic change that they need?”