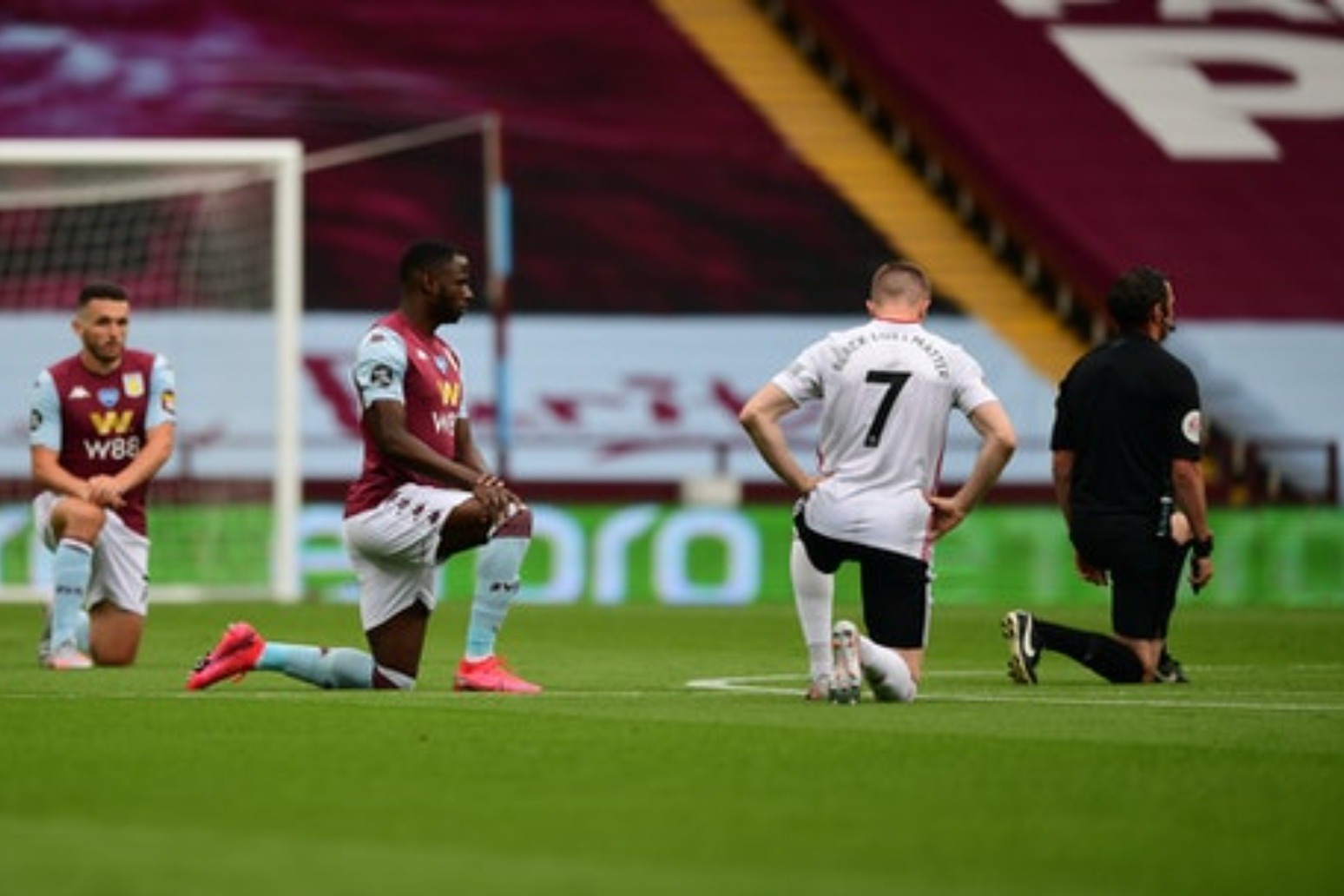 Players kneeling in support of Black Lives Matter retains the backing of fans but opinions are split, according to a survey by YouGov which also found strong opposition to the new handball law. The fans surveyed were narrowly in favour of players and staff taking a knee pre-match, a margin of 49 per cent to 41 with 10 per cent answering “don’t know”.

The picture was clearer when it came to the handball law, with 27 per cent feeling the amended law is either “very fair” or “somewhat fair”, compared to 66 per cent who labelled it “not very fair” or “not fair at all”.

“We understand there is a range of views on this, but if you had to choose do you…” with the options to approve, disapprove or answer “don’t know”.

Among a weighted sample of 915 respondents, 49 per cent answered that they approve while 41 per cent disapprove with the remainder unsure.

The margin was 48 per cent to 43 among male and 52 to 35 among female respondents, while the breakdown by age offers further insight with support stronger among the younger generation.

The survey also considered social grade and region, with the ABC1 social class in favour by 56 per cent to 35 while the C2DE class were opposed by 48 per cent to 39. The strongest regional support was found in Scotland (61 per cent to 33) and London (59 to 31), with only the “Midlands” and “East” regions narrowly opposed to the gesture.

On handball, fans were asked: “For the 2020-21 Premier League season, the International Football Association Board (IFAB) has amended the previous handball rules. One of the amendments means a player will be penalised if a ball touches a player’s hand/arm and it is judged to have made their body unnaturally bigger or if the player’s hand/arm is above or beyond their shoulder level. If this occurs in the penalty box, it means a penalty kick will be awarded, either by the referee or through a VAR (Video Assistant Referee) check.

“How fair, if at all, do you think the new handball rules are?”

Eight per cent of respondents in the weighted sample judged the rules “very fair”, with 19 per cent saying “somewhat fair” for a net total of 27 per cent in favour.

That left 27 per cent judging the changes “not very fair” and a hefty 39 per cent voting “not fair at all”, meaning 66 per cent in all opposed the changes. The remaining seven per cent opted for “don’t know”.

Male respondents were more strongly opposed, 71 per cent to 25 compared to a 55-34 split among females. The strongest opposition was to be found among the over-55 age group, 73 per cent to 22, though the margin was closest among 35- to 44-year-olds – 53 per cent opposed to 40 per cent in favour.

Tottenham fans, who saw their team concede a late equaliser to Newcastle after Eric Dier was penalised under the new handball law, were among its most vociferous opponents – 83 per cent judged the law unfair, including 51 out of a weighted sample of 74 opting for “not fair at all”.