Trump and Biden clash on coronavirus and race in final debate 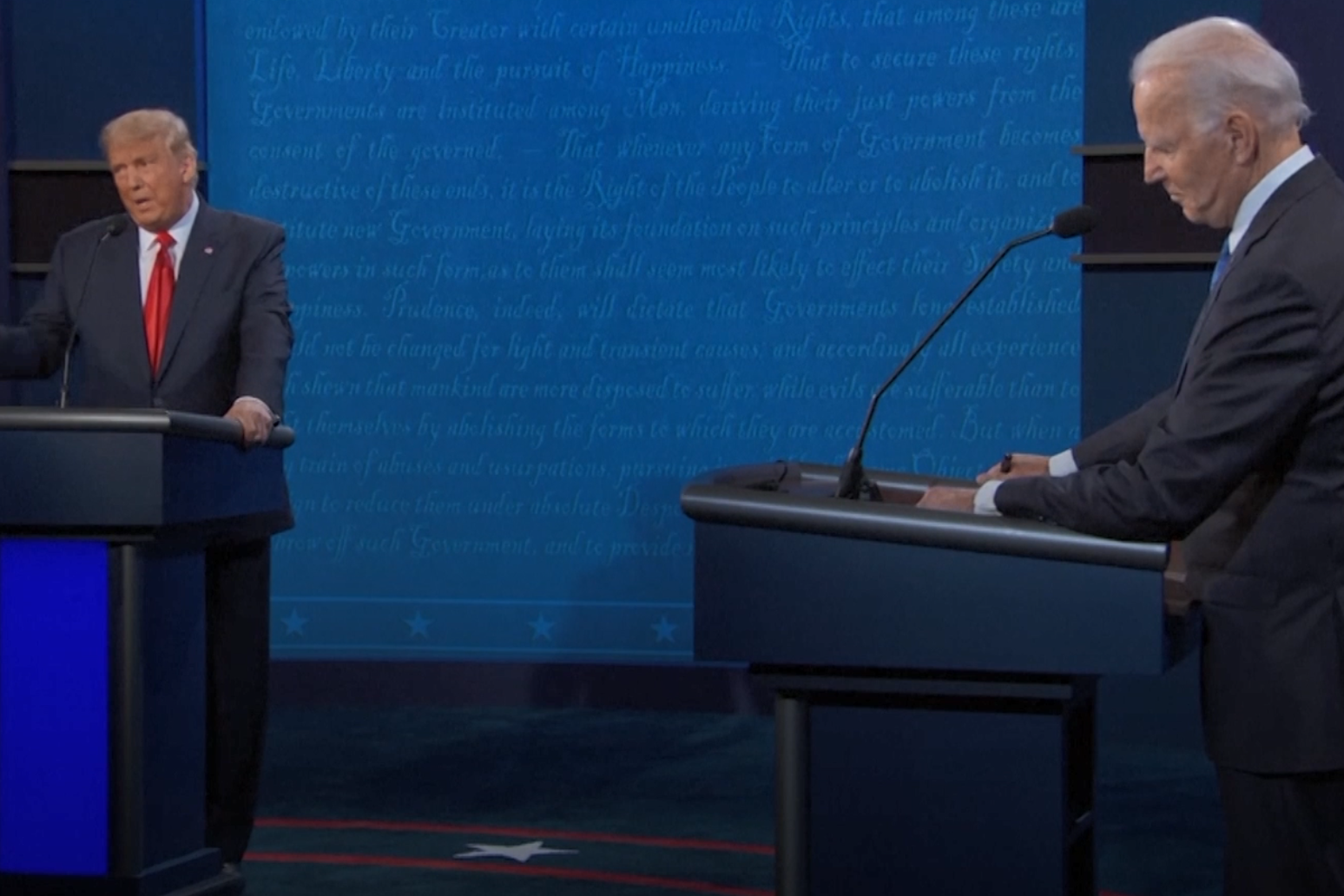 The second and final presidential debate between President Donald Trump and Democratic challenger Joe Biden was a much more civil affair than last month’s widely-panned first debate. With a mute button in place this time around, the candidates interrupted each other far less frequently, even as they clashed on issues ranging from the coronavirus to crime and global warming.

While Mr Trump and Mr Biden responded to each other’s answers — shaking their heads disapprovingly or smiling, in the case of Mr Biden — the two largely avoided speaking over one another.

And neither man tried to speak at length while he was muted during opening questions.

They opened the debate by sparring over the coronavirus pandemic.

Mr Trump insisted he had done a good job with the worldwide pandemic and said the country needs to “learn to live with it”.

Mr Biden shot back: “People are learning to die with it.”

Responding to unfounded allegations from Mr Trump that he has received funds from Russian sources, Mr Biden noted that he has released 22 years of taxes, which he says show “I have not taken a penny from any foreign source ever in my life”.

Pointing his finger at Mr Trump, Mr Biden asked: “What are you hiding?”

The two candidates took questions on how they would deter foreign interference in American elections.

US officials have reported that Russian hackers have targeted the networks of dozens of state and local governments in the United States in recent days, stealing data from at least two servers.

The president said that nobody has been tougher on Russia through sanctions and pushing for increased military spending by NATO than him.

Mr Biden said his son did nothing inappropriate while working for a company in Ukraine while noting the president was the one who got impeached for dealings with that country.

Mr Biden responded that the accusation had been investigated repeatedly and did not link him to any wrongdoing.

He also noted that the president was impeached for attempting to pressure the president of Ukraine to find potentially damaging information on his family.

President Trump said former president Barack Obama’s government left him a “mess” to deal with in terms of tempering relations between the United States and North Korea.

Mr Trump said he had warded off a war that could have threatened millions of lives, adding Mr Obama told him he viewed potential danger from Kim Jong Un as among the country’s greatest national security threats.

Mr Biden said Mr Trump had “legitimised” a “thug” by meeting and forging a relationship with Mr Kim, while the president countered by saying that Mr Kim “didn’t like Obama” and added that “having a good relationship with other countries is a good thing”.

Mr Biden responded by saying the United States “had a good relationship with Hitler” prior to the invasions that led the country into World War II.

Mr Trump defended his administration’s separation of immigrant children from their families following detentions along the US-Mexico border.

Mr Trump said his government had constructed more than 400 miles of his promised border barrier. He also said “they built cages”, referring to Obama-era facilities depicted in media reports during the separations.

As he has done since the primary campaign, Mr Biden defended the immigration policy of the government under Mr Obama, admitting that it “took too long to get it right”.

The debate then turned to race relations, with the former vice president calling the current president “one of the most racist presidents we’ve had in modern history”.

Mr Biden said the president “pours fuel on every racist fire” and noted that at his last debate the president would not condemn white supremacy and told an extremist group to “stand down and stand by”.

Mr Trump portrayed himself as a champion of black people, repeating his standard line that no president has done more for black Americans aside from Abraham Lincoln – which Mr Biden sarcastically seized on by referring to the president as “Abraham Lincoln over here”.

He also accused Mr Biden and Mr Obama of ignoring issues of racial justice when they were in power.

Touting criminal justice reform and opportunity zone bills he signed, the president said: “I am the least racist person in this room.”

The two also sparred over the nation’s reliance on oil and what is required to reduce future emissions.

Mr Biden said the US needs to embrace clean energy and eventually transition away from the use of oil.

Mr Trump quickly pounced, cutting in with “that’s a big statement”, and wondered aloud if voters in oil-producing states like Texas, Oklahoma and Pennsylvania were listening.

Mr Biden said that his plan was far more nuanced than Mr Trump was making it sound and emphasised that the transition would be gradual.

He also criticised the president for subsidising the oil industry while failing to give similar benefit to clean energy producers, like wind and solar power.

To close out the debate, both President Trump and Mr Biden offered divergent versions of what they would tell Americans who did not support them on a hypothetical Inauguration Day.

Mr Trump said that if he is re-elected, he would tell voters who did not back him in the election that “success is going to bring us together, we are on the road to success”.

Meanwhile Mr Biden said he would tell his detractors that “I represent all of you, whether you voted for or against me” and “I’m going to make sure that you’re represented”.