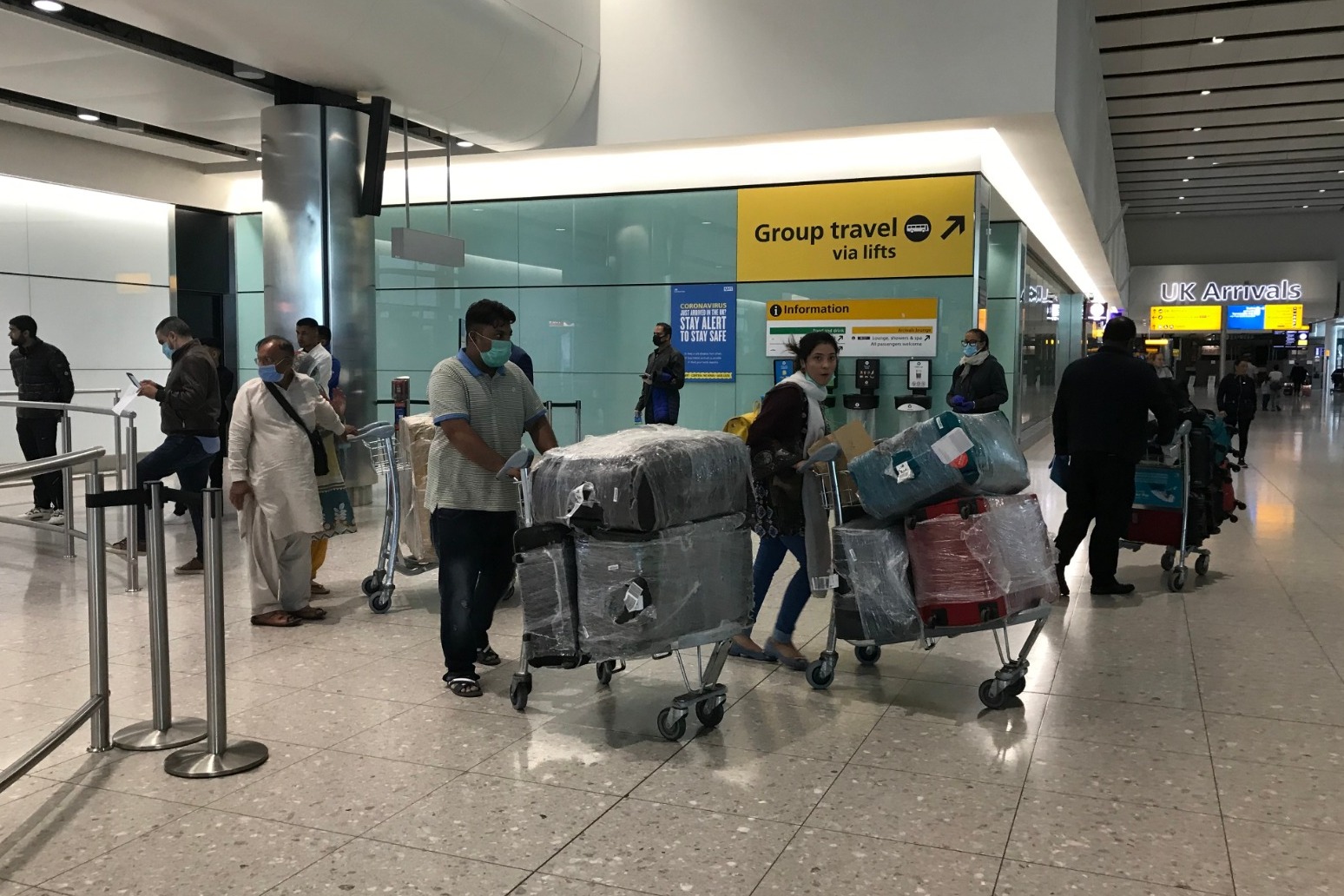 Travellers arriving in the UK will now be required to self-isolate for 14 days under Government measures to guard against a second wave of coronavirus.

All passengers – bar a handful of exemptions – will have to fill out an online locator form giving their contact and travel details, as well as the address of where they will isolate.

People who fail to comply could be fined £1,000 in England, and police will be allowed to use “reasonable force” to make sure they follow the rules.

Border Force officers will carry out checks on arrivals and may refuse entry to a non-resident foreign national who refuses to comply with the regulations.

Failure to complete the locator form will be punishable by a £100 fixed penalty notice.

The plans have been met with strong criticism from opposition parties and some Conservative MPs – as well as the travel industry.

British Airways has begun legal proceedings over what it calls the Government’s “unlawful” quarantine measures.

A leaked Home Office document seen by The Daily Telegraph reportedly said there was no method for officials to ensure a person’s details are “genuine”.

The quarantine regulations must be reviewed every three weeks, with the first taking place by June 29.

They could be in place for a year, when the legislation expires, unless the Government decides to scrap it sooner.

Travellers arriving from within the Common Travel Area – which includes Ireland, the Isle of Man and the Channel Islands – will not need to self-isolate unless they have arrived in the CTA in the last 14 days.

Home Secretary Priti Patel said: “We all want to return to normal as quickly as possible. But this cannot be at the expense of lives.

“The science is clear that if we limit the risk of new cases being brought in from abroad, we can help stop a devastating second wave.

“That is why the measures coming into force today are necessary. They will help control the virus, protect the NHS and save lives.”

– Heathrow boss John Holland-Kaye said around 25,000 jobs could be at risk at the west London airport, and warned that the scale of cuts could have a “devastating impact on local communities”.

– The Department of Health and Social Care said another 77 people had died after testing positive for coronavirus in the UK as of 5pm on Saturday – the lowest daily total since March 23, though figures are regularly lower on weekends.

– No new coronavirus deaths were reported in Scotland for the first time since lockdown began, according to the latest Scottish Government figures. There were also no new Covid-19 deaths reported in Northern Ireland.

– The global death toll passed 400,000, according to data collected by Johns Hopkins University.

– Thousands of anti-racism protesters attended rallies across the UK on Sunday despite the Health Secretary Matt Hancock saying there was “undoubtedly a risk” that it would lead to an increase in Covid-19 cases.

– Greater Manchester mayor Andy Burnham and Liverpool City Region mayor Steve Rotheram said the prospect of regional lockdowns in the UK is cause for “serious concern” as some council leaders fear it would be unenforceable.

On Sunday, Mr Hancock insisted the Government made the “right decisions at the right time” with the coronavirus lockdown, despite a leading scientist saying lives would have been saved had ministers acted sooner.

Infectious diseases expert Professor John Edmunds suggested the UK should have imposed restrictions in early March – although he admitted it would have been “very hard to pull the trigger at that point”.

Prof Edmunds, who attends meetings of the Government’s Scientific Advisory Group for Emergencies (Sage), told BBC One’s The Andrew Marr Show: “I wish we had gone into lockdown earlier. I think that has cost a lot of lives unfortunately.”

Asked if he agreed with the professor’s comments, Mr Hancock later replied: “No. I think we took the right decisions at the right time.”