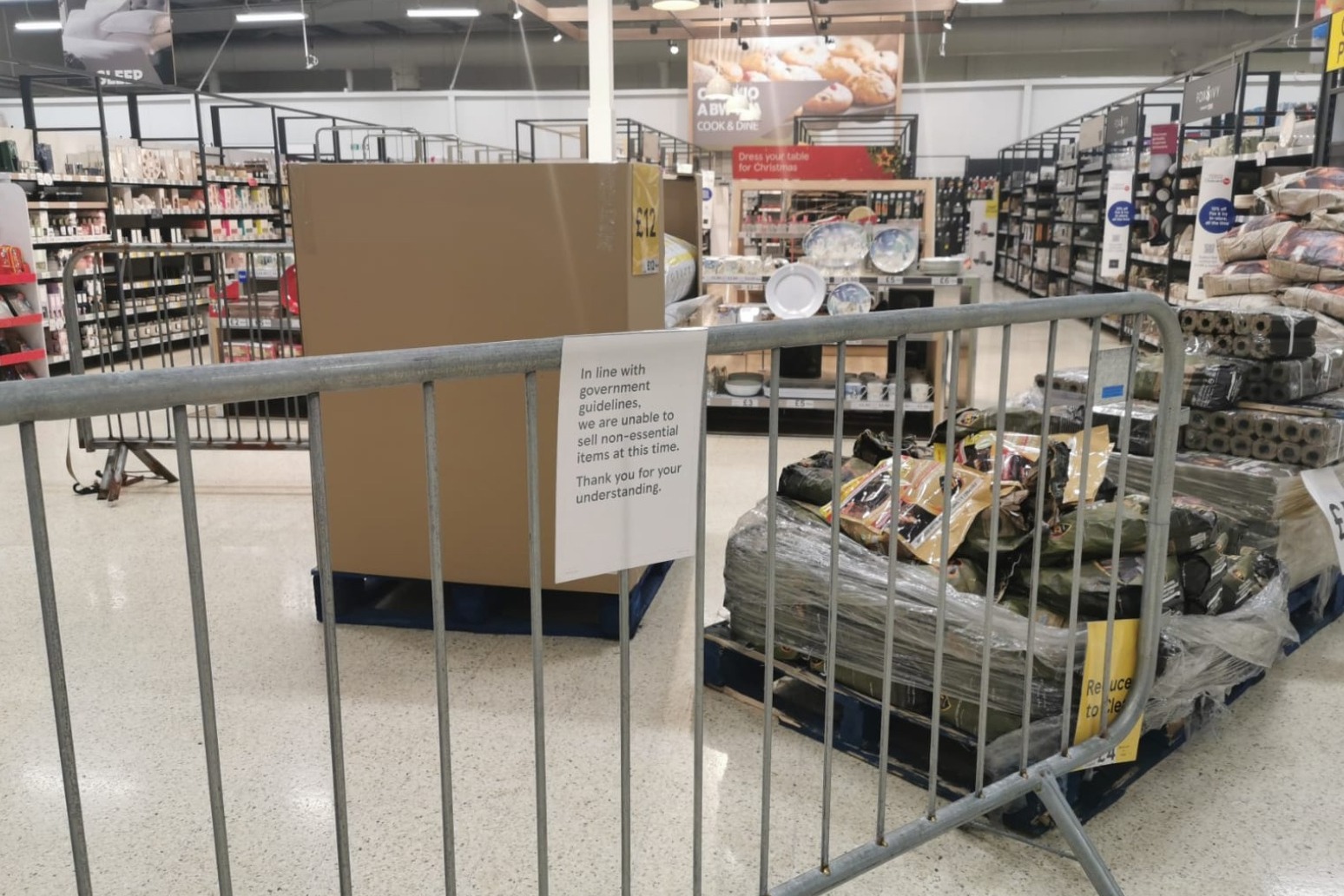 The Welsh Government will review how the ban on supermarkets selling non-essential items during Wales’ firebreak lockdown is working, First Minister Mark Drakeford has said.

Mr Drakeford announced that ministers would be “reviewing how the weekend has gone” with supermarkets and “making sure that common sense is applied”.

Under the firebreak lockdown, which began at 6pm on Friday and will end on November 9, non-essential retail including clothes shops, furniture stores and car dealerships must close.

Supermarkets have been told they must only sell essential items to discourage people from spending more time than necessary in shops and be fair to retailers who have had to shut.

On Saturday, more than 34,000 people signed a petition calling on the Welsh Government to reverse the ban, which it described as “disproportionate and cruel”.

Mr Drakeford tweeted: “Thank you for all your efforts over the last 24 hours to stay at home. We know people are fed up.

“It’s not easy, but we all have a responsibility to stop the virus spreading.

“We’ll be reviewing how the weekend has gone with the supermarkets and making sure that common sense is applied.

“Supermarkets can sell anything that can be sold in any other type of shop that isn’t required to close. In the meantime, please only leave home if you need to.”

His tweet followed a statement from the Welsh Government earlier on Saturday, which insisted the ban was “not for the sake of being difficult”.

A spokesman confirmed that items found in other essential shops – such as stationery and greetings cards – could still be sold in supermarkets during the lockdown.

Guidance previously published by the Welsh Government said certain sections of supermarkets must be “cordoned off or emptied, and closed to the public” during the two-week period.

Supplies for the “essential upkeep, maintenance and functioning of the household” – such as batteries, lightbulbs and rubber gloves – can be sold during the lockdown.

Images posted on social media showed aisles selling products such as children’s clothes, greetings cards and book blocked off, with plastic sheeting placed over items to prevent shoppers from accessing them.

The petition calling for the ban to be reversed immediately states: “We do not agree that this is a prudent or rational measure, and will create more harm than good.

“We do not agree for example that parents should be barred from buying clothes for their children during lockdown while out shopping.”

Paul Davies, leader of the Welsh Conservatives, said he had written to the presiding officer of the Welsh Parliament calling for members to be recalled to discuss the ban.

He described the popularity of the petition as a “clear sign” that people in Wales want the rule “scrapped immediately”.

One video posted on social media appeared to show a man ripping down plastic sheeting that was covering clothing aisles in a supermarket.

The ban on selling non-essential items was announced in the Senedd on Thursday following a question to Mr Drakeford from Conservative MS Russell George.

Mr George said it was “unfair” to force independent clothing and hardware retailers to shut while similar goods were on sale in major supermarkets.

In a statement published alongside his letter urging a recall of the Senedd, Mr Davies said: “It is madness that people have been banned from buying books, bins and baby clothes in local shops.”

He described the lockdown in Wales as “disproportionate, unnecessary and biting our economy hard” and said he would rather see people able to buy items in local shops than “see millions spent at online internet giants”.

Under lockdown rules, people can only leave their home for limited reasons, such as to buy food and medicine, provide care or take exercise, and must work from home where possible.

Leisure, hospitality and tourism businesses are closed, along with community centres, libraries and recycling centres, while places of worship are shut other than for funerals or wedding ceremonies.

Ministers hope that the firebreak will reduce the R value – the number of people each coronavirus case infects – to below one.

A new set of national measures is expected to be introduced in Wales after November 9.

Economists have estimated that the firebreak could cost the Welsh economy more than £500 million, but ministers say a longer period of measures would be more damaging.

On Saturday, a further 1,324 people were reported to have tested positive for coronavirus in Wales, bringing the total number of confirmed cases to 41,577.

Public Health Wales said 16 people with Covid-19 had died, with the total number of deaths since the beginning of the pandemic rising to 1,772.